It’s funny – I haven’t thought much about horseshoe crabs in years. I have maintained an appreciation for their prehistoric-ness, but have not really, you know, thought about them. When I was young, my father worked at the Cumberland Island National Seashore and I remember that at some specific time of the year, horseshoe crabs would appear on the beach, often dead and stinking, but largely intact. The creatures were always surprising to me. It was as if they had fallen from the sky – they seemed so out of place on the smooth-edged landscape of the barrier-island’s beach. A reminder that sometimes the world is strange and prickly. They gave me the creeps a little, but I largely took them for granted. They were sandy and smelled awful when you flipped them over to peer at their strange and pleated undersides. (Do their undersides look pleated? I really don’t know if this is true.) We had their shells stacked on bookcases in the hall – they were dusty and cracked, the dull brown of old pennies. In middle school, our class would sometimes take fields trips to the island and we would occasionally come across a horseshoe crab moldering in the sun, the wavelets pushing it’s lifeless legs back and forth, back and forth, moving the animal nowhere. Sometimes kids who lived in the subdivisions, whose father’s worked for the Navy and who grew up on bases and in tract houses – they would squealed and call to the rest of us, prod it with their food, jump back as if it had not just been moved by them, but had somehow reached through time and moved on it’s own, with a mysterious and malicious will for kids who have not seen many wild animals. I acted like a bored expert, explained that horseshoe crabs have blue blood – (as if t 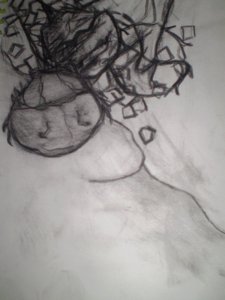 hat explained anything!) and went back to sullenly walking the beach that I had grown up with, looking for a cone shell to bravely pick up. Everyone seemed like an idiot back then. Especially me.
I don’t know if the horseshoe crabs still show up at Cumberland. I realize, at this moment, that I’ve not been there for seventeen years. I will be sad if I never see that place again. Horseshoe crabs are amazing.