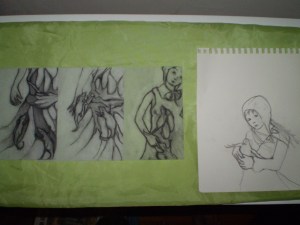 Well, I did it again. Fell asleep before I could post. Today is my son’s 7th birthday. It is not yet 7:00 am and already the taste of frosting is souring my mouth. I fell asleep before I could frost the colonies of cupcakes that clutter the kitchen.
I drew the series of three during a work retreat that was a retreat only in that we went into a room and stayed there all day. I find myself to be obnoxious during those sorts of things. Questioning speakers in a way that doesn’t make a lot of sense, veering toward esoterica for my own amusement. Totally inappropriate, but compulsory. I just can’t sit there and listen politely. Not for hours, anyway.
My boy tells me there is a squeaking noise downstairs and that one of the cats is tearing up the rug in pursuit. Good morning. More later.

I think the girl’s name is Pleura.