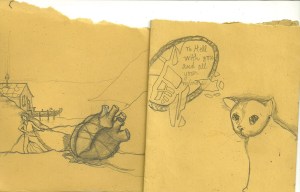 I drew only a bit, here and there, the past few days. I seem to be going through another phase of mythic content. Stolen moons and heavy hearts.
The drawings are satisfying. Quick, but worthwhile. I need to sharpen the colored pencils, to make the scenes of recent days more vibrabt. I am not sad, or mournful. Penciled sketches only tell part of the story.

It tried again to snow today. But, the flakes didn’t stick.

The world not white, but grey.

I can still read tablature. I wasn’t sure if I’d still be able to. My comprehension of the dots and lines surprised me. I wondered if, perhaps I was having some seizure of cognition, with the unexpected and delightful effect skills that enhance musical flexibility.

But, I am almost second-nature with Sourwood Mountain. Still working on My Old Kentucky…

Boil Them Cabbage Down is a cinch. I need to remember what the songs sound like. But, right now, not knowing sort of helps. The lack of precedent is comforting. 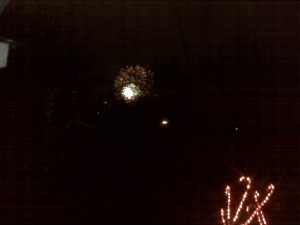 What if I had never tried tablature again? Or I tried, but at the wrong time – a time when my brain wasn’t firing in the just right way for me to realize that I could make sense of the dots and lines.

Ability is 1/3 what you can do, 1/3 what you think you can do, and 1/3 what you’re willing to try.
(Motivational Poster featuring Golden Retriever catching a frisbee in mid-air, over the Grand Canyon: $19.99!) ( A must have for any low morale environment!)

I love the banjo.

(Current: This picture was taken from the front porch. You can see only a portion of our spectacular “Christmas Special’ and only a blur of fireworks. Why there were fireworks last night, I don’t know. It was a nice surprise.)

Have you ever seen a pig be Santa? And the pig was in a sleigh and all the reindeers turned into horses.

Iceskaters on the move? (Moon?)

The sky gave me an awesome ex-anniversary present this afternoon. Actually, my brain gave it to me. I gave it to myself.

Today I told myself that I would practice. That I would commit to playing songs instead of just noodling around ’cause you can’t mess up if you’re not trying to play something. Even royal screw-ups can seem like grand finales. But, music makes me happy. I can’t just noodle. I need songs.

When I got home, I picked up the banjo instruction book that had recently come into my possession.

I was pleased to learn that I knew most of the first two chapters (like how to wear fingerpicks) and also to learn that I could reduce strain by adjusting the position of my left hand. Okay, yeah, rolls. Rolls schmolls. I’d tried to learn banjo this way before. It numbed my brain and my practice always disintegrated into the repetitive noodling I can’t stand.
Is this becoming allegory, metaphor. I don’t know, but it’s a true story.

I looked at the tablature at the end of each chapter. It looked as complicated as it always looked. I tried to find a song I half-way knew. Bluegrass is not usually my forte. Some of the mournful songs are nice. Somehow the quick precision of the fast pickers, their aging bodies held still. Save for their feet.
Unattainable.
My Old Kentucky Home.

I picked out the notes, played the sections a few times. Realized that I could read the tablature. That I was looking at my fingers at all and I CAN READ TABLATURE.

Did I even spell it right? I don’t know. What I do know is that I can learn any song you want me to learn. 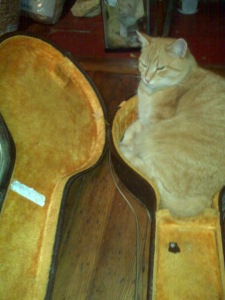 The charges were dismissed by a clerk in the Office of Criminal Records, but I still had to pay 200.00 for Failure To Appear.

Today is my ex-anniversary. How fitting that it’s cold and grey and I feel a little ripped off.

I’m sitting at the courthouse (Courthouse?) waiting to have a bogus court date (Court date?) re-scheduled. It was a silly citation, for an expired tag on a car that was not mine. The kids weren’t in car seats. We were only going 6 blocks from home. The officer was young and heartless. Unmoved by my tears, perhaps I didn’t cry enough. I just wanted to take the kids to clay camp so I could go to work.
I ignored the court date, figured they’d send me a bill for the fine. Instead they sent me a notice for failure to appear and a warning that if I didn’t take care of it, my driving priveleges would be revoked in the early days of 2010.
So, here I am. On a hard wooden bench, wishing I had my act more together. That my laundry was folded, the floors swept clean. My bills organized and paid.
Christmas is in 3 weeks. I haven’t gotten the children much. I had to start over on Leo’s scarf. It was too uneven. He probably would have worn it anyway. However, the green yarn had the sad edges of an impressionist painting. It looked like an orphan’s scarf.
I wish I was at work.

It actually hurt me. To hear the truth of my heart in such an abridged fashion.

I drove home tired and on the edge of weeping. The sky heavy with stories of a possible snow. I sat down and drew a cat. Beaten up and slant-eyed. Not really pretty in anyway. It reminded me of Little. Strange Little who always seems close to death somehow, though he’s technically healthy for a cat his age. He has the feline equivalent of what modern educators call cognitive disability, but what used to be called mild mental retardation.
As a kitten he never learned to clean himself. He’s often still a bit dirty, but I think his brother Boober cleans him sometimes. I’ve seen this kindness only several times, but the days are long for cats. Who know what happens when I’m not home. A lot of sleeping. Occasional errant urination on offensive objects placed in corners.
Perhaps the bathing of brothers.

The cat in the picture looked sad. I decided to draw a mirror. “We define ourselves based on our perceptions how others see us. The world is the mirror in which we see ourselves.”

The mirror was broken, the cat now defiant. To Hell With All Your Mirrors: is all I have to say.

I will define myself, thank you very much.

I want friends. So bad it hurts like a paper cut. But, this wanting won’t kill me. Won’t tear apart my heart. Only people do that sort of thing.

However, I have seen kindness lately and it imprinted on me somehow. Made me doubt my doubt.

I swept the porch and ordered pizza. Played banjo while my mom square danced with children. Turned up the stove and said thanks to the sun setting on this melancholy day.
——Original Message——
From: Me
To: Me
ReplyTo: Me
Subject:
Sent: Dec 3, 2009 5:22 PM

I met with an unnamed ally today. She told me that I am clever, but wounded. Fearful, but longing. 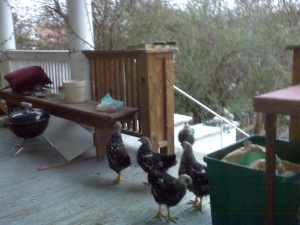