Current: lots of drawings piling up, photographs needing transfer from one digital bank to another…in the meantime, here are some draft-ish drawings entitled:

A Brief Illustrated History of My Conception. 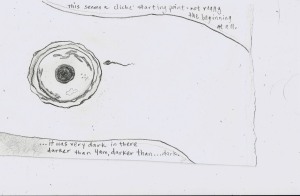 The egg and spermatazoa were unaware. At least, I assume they were.

Who knows anything of the consciousness of cells – except, of course, the cells themselves.

And there is something cliche’ about starting with sperm+egg meet. The voiceover is all too predictable.

What is not predictable is that a single cell from my father – a single cell, among millions! Well, this cell – a bundle of DNA blindly and speedily wriggling its way through wet, warm dark…well, it bumped into a cell within my mother’s body. Inches from the flat surface of her exterior abdomen, this cell – round and without much discernible movement – sat in a small tube, alone for the first time in 25 years. 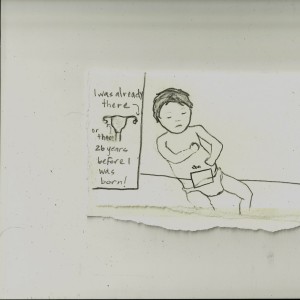 For all that time, since before my mother was even born, it had hidden in her ovary with so many others very similar to itself.

(However, it is important to note, these cells – like the tiniest grains of sand! – share similarity in packaging alone. The shape of human egg cells is unremarkable, as is the presence of uniform cell walls and cytoplasm, etc. Within the nucleus – everything is different!)

(I could have green eyes and thick black hair that goes grey early.)

(But, I don’t – because the single
egg that was released during that ovulation contained the unique DNA – deoxyribonucleic acid – that formed the foundational me, upon which I became…well, the person writing this.)