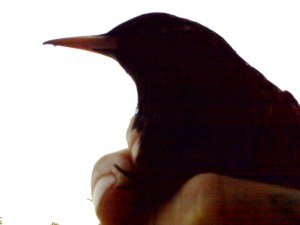 THIS IS NOT A HAIKU!
Wounded bird, found in field.
Had phone in pocket, took picture quickly.
Bird later died.
It had a remarkable beak.
A starling, I think? 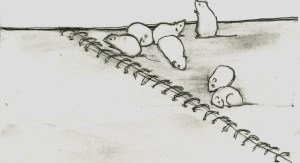 I drew these mice during a meeting at work.
They have big ideas.

(If only they could write them down!)

I was trying to draw a pregnant lady
holding a child’s hand. However the position of her hands sans child-not-yet-drawn…well, the position suggested that she be holding a rifle instead. As I drew it, I found myself a little amused by how preposterously dramatic such an image is. Really. Ridiculous. And then it occurred to me that the lady in the drawing looked a little like a few different celebrities smashed together. Audrey Tautou, as well. My apologies.

Pregnant women with rifles shouldn’t be shocking. They hardly exist! Pregnant teenagers? We should be shocked and awed and outraged.

There are no more recent statistics for NC alone and not much easy-to-find information for the national numbers. In 2006, 1 out of every 3 teenage girls would get pregnant prior to age 20! (“The Real Costs of Teen Pregnancy,” Washington DC. National Campaign to Prevent Teen Pregnancy, September 2006.) That is ridiculous!

The total number of North Carolina teens aged 15-19 who were pregnant in 2007 was 19,615. That number includes both married and unmarried females. Over 29 percent of those pregnancies were to girls who had been pregnant at least once before. The number of 10- to14-year-olds who were pregnant a few years ago was 404. (I pulled this info. from a newspaper article and tried to verify it by looking at the primary source of the statistics, the NC Dept. of Health and Human Services, Vital Statistics. Okay, totally impossible to navigate this data! Completely inaccessible! I’m sure that if I had hours to spend reviewing stodgy pdf files, I could find what I was looking for – but…it’s pretty daunting.

The thing is, I am fairly, passably intelligent and I was intimidated by the state’s presentation of it’s data about us, the population! So, how is someone who has not had the benefit of all I’ve had the benefit of going to even think about approaching factual information. It seems like a strange and foreign language.

What is really peculiar is how difficult it is to find really recent data. I mean, facebook updates itself constantly, and we can’t keep track of something as significant as teenagers having babies?! Huh?

I leave a lot out of this project. A lot. I was raised not to air laundry: dirty or otherwise. It is for this reason that I think my family sort of pretends that this thing doesn’t exist. However, if they read it – they would realize just how much I leave out. For example, did you know that Sammy Hagar of Van Halen once held up MY shoe and made gestures re: the length of his penis as it compared to my size 9 foot. True story. I was 13. What a gross dude.

(Of course, he had no idea it was MY shoe…it was simply a shoe thrown at him from the arena audience. I really don’t remember why I was at that concert, I do remember wishing I had worn different shoes…ones that didn’t fall off.)

Okay – yeah…so that’s pretty inconsequential. The point is that – while this may seem personal – there are about a bajillion different things I leave out almost entirely. I hardly ever talk about my kids…and they’re, like, gigantic! In their case, I am not sure if I have the right to make their childhood public – even in this fairly respectful forum.

Specific Pregnant Teenager Report: I don’t have the right to make her story public either.

I am involved with a young lady of unfortunate circumstance. Tangentially, on and off. Degrees of varying support, often involving some sort of transportation or fast food purchase. My efforts to help in significant ways are hesitant. On the one hand, there are some things that this girl has got to realize quickly and about a hundred different phone calls she needs to make, appointments she needs to keep, people she really ought to drop. I know these things, on the one hand.

On the other: who am I to tell anyone what to do? I am not sure of the ethical line between offering help and forcing help? It is a complicated issue, full of demography and history.

I definitely don’t believe I am an authority on anything other than myself…sometimes.

Here, I was intending to draw my recollection of a lady I saw walking down Coxe Avenue (no joke intended, not at all) who was wearing an outfit so short and filmy white I could’ve sworn it was a sexy sleep set, out for a walk in the mid-afternoon.

I got as far as the curb and then I drew a squirrel instead:)