It occurs to me that I ought to ask this friend to vouch for me. Just like I asked my boss to comment that I was NOT CRAZY. Really. Very functional-ish.However, it seems I may have written myself into a corner with someone again. I have – up to this point had two significant correspondences with people, both men. The first was epic and resulted in the friendship that prompted the recording and sending of Hortense Brant.

The second was cryptic and shortlived and was the result of a chance encounter with a daring pro skateboarder while getting tattooed. He had connected earlobes, too? I think? We found eachother terribly interesting for about two seconds and then I fell apart after changing all my plans and I think I may have written him everyday? Actual mail! Not anything racy or seductive, just my day…working at the dog kennel. Talking to old friends long distance, reading D. Delillo’s Underworld, trying to figure out if I really wanted to take a bus to the tip of Maine, cross over to Nova Scotia. I was supposed to leave on my birthday.

I sent him the cocoons! For good reason, trying to be reasonable about foisting my friendship onto him in the form of prose (probably dreadful!) and angst and SEast Ga. and graduate school—and … my goodness! I was a wreck. The letters I wrote him probably saved me from doing something even stupider than I did. Which was drop out of graduate school and move back home, planning on building a small cabin set back from the bank of Catfish Hole. It was then that I started working at the Humane Society dog kennel. I ran the two lane blacktop every afternoon at four, when I got off work – spraying, washing, feeding, scooping, reading, daydreaming, trying to be calm in giving up. That’s what I was doing. Giving up. I had gone to the hospital in Athens, a couple months after I dropped out my graduate program in Sociology. I was deeply ashamed. The high school drop out the kid who quit t ball the girl who was sent away when she was thirteen years old, who tested as being 151 and proved to be beleaguered to the point of entanglement. Back home again. And it was all a mess.

I made a deal with myself. If I found a cocoon, a single cocoon…I would write to him.

I found five, without even looking. One of them with the imprint of the oak leave it had clung to etched into it’s smoothly silk matte side, gold beige. A true prize of a cocoon.

I found, while looking for the hot glue gun, this old mix tape that a friend sent me the:

I had wrapped it in a plastic baggie. Like evidence – only the bag was flimsy and flappy and didn’t zip or lock. So, unreliable evidence at best.

The play list is by artist only and begins with a reading of poetry by a woman named Hortense Brant. She lived in an old Boulder house and visited with my friend, who was so taken by her old, old age, her name (Hortense!) and her lilting vocabulary that he – on a summer travelling retreat turned winter hiatus – recorded her words and sent them to his friend…i.e. Me.

(When the elderly Hortense died, several years later, her entire estate was willed to the Catholic Church!)(And now it is no longer – in some real shape or form.)

(Out of curiosity, I google searched Ms. Brant and though she has some connection with the Special Collections library at UC Boulder (she published a book of poems, Modern Troubadour, in 2002? Hmmm…post-humous? Very interesting. I see she has oral history on file in Boulder as well. I have her voice on a cassette tape in my dining room.

The songs seem old and warbly. The Art of Flying, Nick Cave’s version of By The Time I Get To Phoenix, old Wilco, Granfaloon Bus.
And songs that feature my friend on voice or instrumentation in a younger style.

I should probably play the tape into my 8-track and digitally save the collection. Then put the whole cassette into a shadow box. It is – afterall – nonreproducible.

My life is chock full of one-in-a-millions. I still am not used to the surprises. It is out of disbelief that I save so much.

My friend was – at one time – planning to publish Hortense Brant’s poetry and voice. I don’t think he ever got around to it. He makes records and books though.

A very good, amazing person with a keen eye for the odd raw and jangly beauty of the things that people can create with sound and color. And a definite interest in the truth of our stories, sound, and images – as we experience them in the fleeting way that we do.

That’s the thing – sometimes there really must be some oddity at work. Or it may just be a matter of resistance or resonance.

I have just come to a segment unravelled in my third epic penpal adventure. It felt heavy to me. I didn’t recognize the feeling. It made me squirm. It was a beautiful exchange, full of powerful coincidence during a winter of thick snowfall.

The thing is: I forget how ORDINARY people are. Even quiet people, even brilliant people, even lonely people. And I forget how ORDINARY people don’t react well to impassioned and poetic flights of familiarity-laced fancy…from, um, okay – yeah, maybe it’s a little weird to establish intense dialogue with intriguing strangers. But, the thing is: it’s Saturday night. It didn’t even cross my mind to go out. Going out at night is not something I do much. I have terrible night vision and – until recently – couldn’t really stay up past 9pm. I suspect the winter doldrums, hibernation. The sun is out and so I am up later. The last thing I want to do with my precious time is go be around drunk people who make me want to be invisible because I’m only there to see the band and they look at me. Of course they look at me! I am tall, tattooed, alone, quiet, possibly crocheting as the band sound checks. I don’t seem to know anybody. I go to the bar. I get a soda. A clear plastic cup of water. I tip them anyway.
So, I stay home.

I don’t even remember what I was talking about. I’m not crazy, but I have had a really peculiar life…like everyone’s but with it’s own unique set of personal trials and tribulations and some very raw humanity.
**********************************this is a rant*****************************************
I seem to seek and attract people whose hearts a little rogue – by birth or circumstance their lines of boundary are blurred or missing. They greet each person who enters their life with a neutral openness that allows the quality of the interaction to fill any gaps or crevices in the human heart. If the interaction is significant enough it will become the foundation for an assigned measure of MEANING associated with the person. This is often expressed in terms of absolute loyalty or distrust. First impressions, for those with beat-up hearts, are huge. HUGE.
I see this all the time in the kids I work with in various endeavors. The door is wide open and if you – within the first ten seconds of engaging them – blow it somehow…well the door slams shut.
On the other hand, if you are sensitive enough to be hyperaware of the subtleties of human interaction and how much they contain (and if you have a beat-up heart, not dead – just wounded, you scan people quickly for good and bad indicators. Will this person like me? Will this person harm me? Will this person make me smile? So, you sort of understand why the kids are quick to assign trust or distrust. They align themselves with the people they feel they can rely on and the reason they feel they can rely on those people is because they sense some genuine interest in seeing them as a person – whole and true – and some quiet reverence for the story. And usually it is the beat-up hearts that get the picture, because they are open to seeing it…they are seeking humanity to patch up the holes in the walls that may never be rebuilt.

Ooooh. Very dramatic. It’s true though. I’m very open to people and that is why people like me. And that is why I don’t like all people. It takes an enormous amount of energy to scan and plan all these interactions, to be on in such a way as to maximize the positive humanity in the interaction. And my manners, my manners are killing me lately!

I really think I could probably be diagnosed with something. Probably Aspergers. Fuck Aspergers. They say my boy has Aspergers and perhaps he fits the syndrome bill…but we are clever, mindful people and I’d rather be disordered than ORDINARY.

I’m not crazy. I’m honest – and getting more honest by the minute. I recognize that the staccato of the click-and-tap is spelling out words that seem tense and declarative and admittedly, my language usage is a bit strong this evening. But, I am really tired.
Do you have any idea how much energy I have to use just to make sure I don’t offend anyone? It is exhausting. For about a year and 1/2 – I tried, in an admittedly disjointed way, to be ORDINARY. It almost killed me in the end. The backlash was powerful. It was at the beginning of the backlash that I got my palms tattooed. I don’t know how to be ordinary, but I try very hard to give my very best to people. Which I really ought to stop doing.
All this giving to strangers.

This is about 1tsp. of salt.

I’m living and learning. Tonight I finally opened the package from North Pole Records and am reading the lyric sheet of Miss Massive Snowflake, the words – written and printed by my oldest epic correspondent: to love is to be brave.

Everything this label puts out is a remarkable testament to the capacity for genius-beautiful interpretation of genre and media.
And though my pride means nothing to me, I am proud of my friend. And though I rarely correspond with him, you never forget your first muse, do you? We still hold one another in relatively high regard – 13 years after the fact. We were cowards. But, for the best after all.

I am always the tall girl who walks away alone. I wish, sometimes, that someone would call me back to them.

(I like to try on the goodwill prom dresses I buy before I cut them up to stock my fabric shelves.
Invariably, they look ludicrous.)

Thank You North Pole Records! For existing. And thank you anyone else who has seen me for me and not flinched. 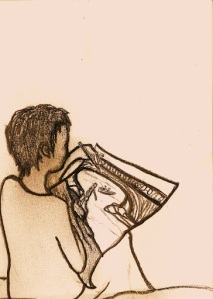