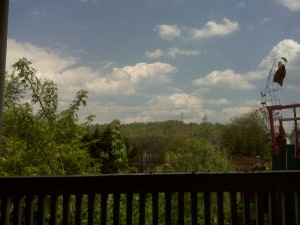 It is a good thing in small doses and, so: I tore off the porch railing today. The old wood smelled warm and resinous and the saw sang ’til it could sing no more. And then the whole rail-structure fell away from the columns and that was that.

I have a much better view of my yard now.

I wrote this story – on and off, send and reply, this morning, which seems like a million years ago. Since then I’ve hauled rocks and manure, worked an evening event at – well, work – attended a birthday party 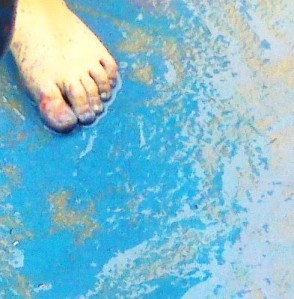 in a lovely N. Asheville home where everything was clean and level and just…almost inconceivable the differences in habitat amongst those who stand laughing on a flagstone patio. Really nice people. They didn’t question why I had to climb the hill above the cul de sac to step over terrestrial orchids and nettles in bloom, fiddleheads unfurling seeing one and then all at once. The Florida Rhododendron in bloom was a blaze of orange at street level, close up it was breathtaking:
That something so remarkable in so many ways
can stand among the poplars and locusts.
It wasn’t planted, it just grew there…
and knows nothing of being self-conscious.

It just is what it is: worthy of a slick-grass hill climb. 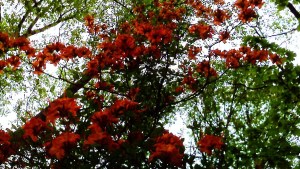 I did a million other small things, not necessarily in this order:
sewed a fabric rose in lieu of a proper ribbon

(the children were impressed)

played badminton with a pretty cool 3-year old, rode an awesome scooter, held a crying-angry child as tightly as I could, noticed how dark he is around the eyes lately and then carried the same child to his father’s house, hurt back, went to work. Made doghouses out of old cereal boxes, explained to anxious mothers of toddlers that, really, it’s okay if she just wants to cut up the pink paper, she doesn’t have to actually make anything. Tore down crepe paper ribbons from exposed pipes (a fabulous ball of primary colors it was! I wish I had taken a picture.) poured a hundred pounds of sand into a bucket, drew a picture of eight young chickens, mended my sweater, swept no fewer than five times, did one load of wash, cleaned downstairs bathroom. It is implicit in all these things that the kids, my boy and girl, are ever-present even if absent…the necessity of clothing, milk, food, the exclamations over skate tricks in the main hall, the hasty wiping of faces, the endless hugs hello and goodbye, all day long going somewhere.

No wonder I crave sleep, although I seemingly get plenty.

(This is only 95% fiction,
the sculpture is real,
as are the bumper stickers,
only with different
punctuation.)

www.meettheweird.com started out as a big joke. It was a few months back when the neighbors were over for a late summer beer in the garden. I talked to them about nematodes and how the Japanese Beetles were nothing this year, so few they even seemed pretty when I saw them occasionally. They said they were wary of using biological controls, you know, what with the long lists of disastrous backlash in the form of marauding toads, kudzu, and blighted trees. I shrugged. They shrugged.

We shrugged some more.

“The thing is, people are always asking us? Where is the ‘weird Saltville?’.” They laughed and looked knowingly at eachother, a shared very Saltville amusement at the tragic silliness of the mundane world outside this oasis in the flatlands. That’s how we had all come to think of it. It was part of living here, you had to sing the place praise. “They must’ve seen the bumper stickers,” I thought to myself. The tourists must think “weird” is endangered here. It was something the man down in the new Saltville Arts District came up with: “Keep Saltville Weird.”

I looked at the garden, and considered the sculpture my wife, increasingly strange herself, had built. “Well,” I said, “I reckon it’s right here.”

I had a long moments thought while the neighbors followed my eyes to that goddam chicken coop. Chickens didn’t even use the damn thing. It rose up almost to the front porch roofline in a scrap-fencing hand that clumsily clung to the starboard side of our children’s old sandboat, which she had mysteriously hefted upon the slanting frame of the thing. The hens pecked around my feet, churring and bocking in the absentminded way that they do and I, with nothing much else to do, started laughing.

The neighbors looked at me, the woman’s head tilted, “What is?”

The first chickens had died, all eight of them. Suddenly and without warning. Just days after we moved them from our spare back room to the coop that was – then – just a coop. They died in the night, huddled together when she found them, wings stiff and tucked, heads folded, eyes closed. A early morning scene of eternal rest that pushed my wife to near hysteria. “The chickens…” she said, in a haunted whisper, “they froze.” I got up from my coffee and stood a little dumbly as my wife walked out of the kitchen and crossed the living room room to the stairs. I noted in the slump of her shoulders and the way the kicked off her shoes on the first landing that she seemed to be going back to bed. I went out to the coop and there they were. Dead in their dream state. It was spring, still cold at night. Still, no freeze or frost for almost a month.

——-
From: Me
To: Me
ReplyTo: Me
Subject: Demolition
Sent: Apr 23, 2010 7:20 PM
WORST INBOX EVER! CAPS LOCK IS CURRENT COMMENT ON THIS, THE SUCKIEST INBOX IN THE HISTORY OF INBOXES.

DEPENDS ON WHAT YOU’RE GOING FOR I GUESS. NOBODY CAN SAY I DON’T DOCUMENT WELL.

2 thoughts on “Demo and Docu”