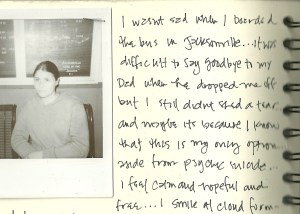 (my scanner takes a lot of creative license:)

By the way – the DSM would probably call me schizoaffective,

…but, I am none of those things.

I know the real deal. Got it figured.

(just like that guy from some western newspaper, ten years ago.)

Yup. Emailing myself again. I was so flattened by the ghost weight in my chest…a literal weight…a hand pressing on my heart, stealing my breath.

And the funny thing, perhaps the thing that makes some people seem crazy is the profound sadness we can feel over things that don’t exist at all…

I am cognitioning the weighty-weight, cross-referencing with all the feelings my living, breathing heart has ever felt…is it panic? Nah. Is it fear? A little, but in a secondary way.

As in: The feeling in my chest scares me.

I feel informed and slapped straight-faced.

My walking and talkingness is doing okay. Though I can feel my face pinch up in flight at inopportune moments. At the door of the kindergarten classroom, patiently waiting to pointlessly tell the teacher that the girl had brought a towel for field day – as instructed. I forgot to put on her sunscreen, though she did remind me – twice.

The boy’s hair is tangled. My great-Grandmother would be appalled at such messy hair. The problem with growing up with someone who put on spectator pumps every single f*in day…well, you grow up feeling spectated.

Always aware of how your are perceived. I think they call it: “a painful sense of self-awareness”

And so the girl was insistent that I wait until the teacher finish talking to the mom of a kid who has well-brushed hair. That I be the one to say, “There is a towel in the extra bag in her cubby.”

The 8am-mode teacher smiled with a clear and impossible smile: “Okay, yeah – just put it in her cubby.”

And my face all pinch-y because it was extremely loud, at least 10 different conversations and because I realized, while waiting for the teacher’s ear, that the girl justs desperately for me to not be a laissez faire mom – which I am not: I am aware of every single f*ing (I keep having to erase the word ‘fuck’) (ha.)

She wants The Teacher to know that I didn’t flake out. That I remembered!

(Man! That sucks! – voice of reason here – I hardly ever actually forget things. I think that the girl has some heavy notions of what the American Mother entails…she seriously has some unrealistic expectations of unflinching robotic service…especially for someone who won’t wear pants.)

– shortcoming I have fallen short of. And I alwaysalwaysalways care what the children feel…I would gladly brush their hair if they didn’t scream at me in a way that hurts everytime I try.

I try to model appropriate (i.e. Kind and Mindful) tone and so I am looking a lot like an idiot who is bullied by her disappointed children.

Ah, and there is the hand again. I think perhaps I might not want to discuss this matter anymore.

I went to sleep with the hand on my chest. I woke up with it on my chest. Is this what the DSM (Diagnostic and Statistical Manual, used by the Psychiatric Institution to diagnosis the citizenry…to give their fear a name.)

Is this what would be noted as “Strange Bodily Sensations” – or some such crap?

I am in fucking mourning. I feel like it’s all been a trick. And I realize now that the bit parts that I have played in people’s lives have written me as The Girl Who is Loved By Ghosts. 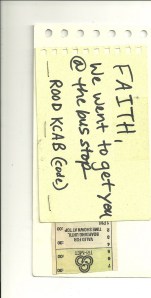 It didn’t occur to me that anyone would meet my Greyhound and so I took the #8 bus to Alberta. Walked up to 19th. I have never felt so free as I did on those four blocks, though my big pack was heavy. I was just so happy to be off of buses!

I was saying the same goddam thing ten years ago. It’s like I just picked up my kids and *snip-snip* deleted almost an entire decade, starting in the late Summer of 2000, when I drove cross-country again. Everything just got so f*ed.

I love my kids, I like where I live…but, what the fuck do I have to show for it?

(a lot.)
(and not just babies and shelter
and other things like that.)

Well, I just figured it out:

Those years when I was quiet and complacent.

(Advice on my wedding day: “Sometimes it’s best to just keep it to yourself.”)

Those years when dulling me down to a trivial burden was…

well – I had a lot of time to think. I spent a lot of time just trying to protect some bright little core of my being. I think I must have been running stories through my head the whole time, or maybe I was just holding the line, waiting until I got myself out that mess (still somewhat in it) and could speak again.

The problem was: I got scared to be alone. I still don’t want to be alone, but the experiment is over. I tried to smile and make small talk and be appropriately interested in things that bore me and be fun…

(Well, yeah ’cause Bele Cher is dumb. I’d rather look at ants on icecream or just sit and watch the people enjoying their hothothot day, a study of shoes. Walking with them is less fun.)

(But, I got up and I walked…about five feet behind, trying to keep up as my family kept getting lost in the people attached to all those goddam shoes!) 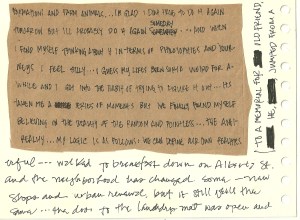 Nonetheless, okay. It just totally rocks me to consider the lives and deaths that have overlapped mine and to realize that I am writing myself an email because their is no other solution…if I just keep writing, keep my hands moving – well, then I won’t have to sit quietly with this ghost-y feel of heartbreak, wishing that I felt at home.

I love my kids. They have the skew in mind and sense that can split a world in two keep you balancing on a needle-fine tip.

A poke-y way to live, for sure. Knowing that there is more than what is spoken, but not having the words to speak of it.

(I realize now that all I have ever been trying to do, since I was young enough to try to figure…is figure out how I fit into it all.) 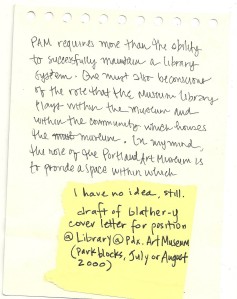 The boy is even more visual than I am – he can replicate skateboard moves in the air with his fingers and I know that he is seeing the board and the bowl…he draws with depth – (though his handwriting is near awful.)

And it’s because she is scared. Last night, “fussing” as she fell asleep: doesn’t like to ride the Activity Bus on the highway, she has a field trip to Lake Powhatan next week.

She cried, “What’s going to happen to me?“

It was the last thing she said and it made total sense. I think I will try to go
with her on the bus…or just drive her myself. We’ll listen to some of her favorite songs : loud.

(Her best friends were Lolly and Am for about two years. And then she made 3-D friends and seems to have forgotten all about Lolly and Am.)

I will try to give more of a shit about their public education. It is important to them. And I will not talk about ghosts, but I will notice things with them and I will never ever call them weird, or freak, or crazy, or whiny

True story.
The journal ends abruptly and then there is a page from mid-September 2001
about a year + later.
World War hasn’t changed much either, but we’ve learned how not to think about it.

We need to learn to remember everything we were ever taught to forget.