the walking and talking-ness goes round in circles

Really – the merchandising of war time slogan-ed junk (made in china, ironically?) via the convenience store industry…well, it has all been politically and economically it has all been downhill from there, hasn’t it?

I talk a lot about the foolish-ness I observe in our patterns of consumption, but I am in no way a saint in this regard. I just made a purchase of small toys (surely mass produced at some unimaginable factory in some unimaginable Chinese city…)

…at the unimaginative Target, I bought laundry detergent on sale that is concentrated and scented – by some chemical miracle – like a Mountain Breeze.

Yesterday, however, I spent a small portion of the afternoon driving my gaseous vehicle around to local independents that I admire for the goods and services they provide. Short Street Cakes. Harvest Records. Hot Stuff Tattoo

(Funny story of awkward social behavior on my behalf…so, on the way to Presbyterian Home for Children where I had a Child and Family Team meeting as a Guardian ad Litem for Buncombe County…

well, I totally rocked out – for the first time in YEARS – to old J Church songs and I remembered the extremely excellent feeling of driving with my good old friend Harry. (Chattanooga, ADDC)

I realized that what I most needed right now was a good smart-alecky friend who would go record shopping with me and who might also want to be in a fun band…?

(Clearly, I was enlivened by the balmy breezes…)

Ah ha! Harrison @ Hot Stuff would be perfect for my new smart-alecky friend who might want to be in a fun band!

I went into the shop and explained that I was in need of ‘a brother’ or a ‘friend’ or some other stumbling explanation of what I needed to talk specifically to Harrison about.

I seem to have side-stepped the fact that I can’t just show up and declare people my pretend brothers and, although I was responded to with relative non-smart-ass-ness with an invitation to ‘come in and hang out’ –

(I am going to use it
and other free and cheesy digital synth programs
as my awesome back-up band.)

…well, I need to work on my casual introduction skills. I’m kind of starting to understand why people don’t always know what to make of me. I sort of come out of nowhere. 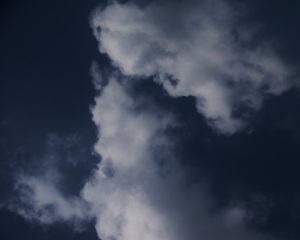 …with a link to hundreds of pages of neurotic outpourings, acute observational obsessions, and drawings+photos of various quality…

Yeah – okay. Maybe I should write up an introductory statement of some sort…a brochure? Or maybe I should just adhere to the old adage: Those who matter, don’t mind. Those who mind, don’t matter.

Except I don’t really believe it and have, in fact, found that a great many people who matter do actually mind quite a bit…they just don’t understand. That made no sense.

So, if I randomly ask you to be in a band with me – well, I am not TRYING to be a freakshow –

I am just not trying very hard not to be…

What DOES make sense is my proposal to The Cake Lady that I come do some portraiture of baked goods and fancy stands. I think it would be great fun to go sit in the cake shop and draw.

It is likely that I would get a free cupcake.

I visited the good co-op bookstore/cafe, Firestorm, and purchased a small manual on bicycle repair, written and printed the year I left Portland and the handwriting seems familiar – but, so many ‘zine-ish type projects are written in that oddly precise post-punk penmanship.

I also got a handbook on Dual Power theory – or something like that…about the development of micro-economies and mini-democracies within communities. And I introduced myself, in a relatively appropriate way. I may attend the orientation there on Sunday. I probably ought to.

I am SO SICK OF CLOUDS!

However, what is far more sick is that there has been a rash of senseless deer killings and dumpings in S/SE Buncombe County. Heads are piled in odd locations and bodies are dumped by old barns. My father found one of the massive stinkfests beside the old scrap barn that is beside the dirt road that leads to their house. Ick.

Apparently, The Sheriff is involved. However, there is no word of it online. This isn’t surprising at all. Also, in Fairview – a charmingly sweet woman named Ms. Locklear (“Just like Heather!”) has taken over the old Scoops Ice Cream location and begun business as Hubbard’s Home – Churned Ice Cream. Hubbard was her grandfather’s name and she uses his recipe – with some experimentation – to churn actual ice cream. She is originally from Lumberton, NC and belongs to the Lumbee Tribe . She is “terrible” at “all that computer stuff…”

I am trying to come up with a reasonable way to assist her in this way, but I tend to be too inclined to give myself over to people whose stories/smiles I appreciate…so, I might go take some pictures, get some more info. and at least help her tear the old Scoops sign down from beside Hwy. 74A. Maybe see if the Fairview Town Crier has written up her business.

Scavengers have been dragging the bones into the road. “Look!” the boy was pointing to a tangle of bone at the side of the road. “…said that’s the scapula!”

The girl was frantically trying to roll up the windows.

Why in the world would ANYONE kill deer just to pile heads and dump bodies. My father, after finding the deer, assumed lazy taxidermy was the reason for the dumpage of so much venison…perhaps out-of-season hunting gone wrong?

Who knows? It is really fairly disturbing, however.

Whoa – I just remembered the event that preceded my 2000 fleeing from S. Georgia: a teenage girl was found at the public dock of the neighborhood one must drive through in order to get to the land I grew up on. Murdered by her teenage boyfriend. I just had to get out of there. It was just too awful and weird to drive past the boy’s house everyday and the gate to the dock…

So, I am thinking I should probably contact some sort of Unsolved Mysteries-ish show? Don’t dead cattle show up around crop circles? Perhaps the topography and tendency toward small organic farms made Buncombe more suitable for cloud circles and dead deer.

I don’t even believe in anything – but, I understand that – to somebody, somewhere – all this peculiarity would be of great interest.

I am starting to understand how a persistently fascinating friend can be pain in the ass.

Yes, it is good to seek meaning in interest wherever we can.

But, neutrality is quite charming, as well.

I have a HUGE backlog of images and a to-do list a 1/2 mile long.

I guess a good place to start would be to get up from the porch-couch and stop looking at the sky.

It is getting me nowhere today.

Getting a bit warm already…yesterday was breezy and perfect in the way that days sometimes are. Everybody talking about how ‘perfect’ it is and interrupting sidewalk conversations to just stand for a moment and let the wind be a punctuation, an ellipsis.

Never a good sign – sitting down to email yourself and talking about the weather.

I downloaded the seminal LP of EPs J Church, Nostalgic for Nothing.

I have a lot of this hugely excellent LP on vinyl…but, cars don’t have tape players any more and besides –

I have a couple of old comp tapes I still listen to from time to time – and they both have a couple songs that I just really find challenging…i.e. noisy and of more value conceptually than musically.

But, I listen to them anyway – because fastforwarding is just too much effort nowadays.

(Do you recall the extreme satisfaction of stopping the tape –

right at the end of the song you can’t stand? Such a small victorious feeling.)

Hard to find any Cringer downloads…just a track here and there on old Lookout comps.

(there aren’t really any youtubes for these ‘old’ bands…which is sort of a shame, since that is the quickest way to link songs to these posts. Frickin’ blogger, man.)

I, obviously, am nostalgic for much more than nothing…but, in a way that – nonetheless – doesn’t add up to much.

I wish that nobody ever died young. When we ordering records off of Blacklist by mail, my friend Harry wrote to Lance and the guy actually wrote back. Which was awesome and huge at the time. It is funny how some songs and some characters become SO defining for us, and yet it seems like – really – nobody has ever heard of them…

I think it is possible that I probably just should’ve, would’ve, could’ve…

However, it is also possible that the same songs that galvanized and buoyed me through adolescence will serve me well here, too.

I might be evidence of a second-adolescence trend among boomlets/gen x’ers…raise your hand if you remember generation x?