I feel comfortable saying there are similarities. I am sure, if I had time to go through the 1000s of cloud pictures I have taken since late June – I could find other examples such as this.

I just happened to see the form in one file and then, uploading pictures from a different file altogether, an external drive…well, it looked familiar.

From my good friend, Florida…

I have spent the last day trying to figure out how to ask about angular clouds. Frankly I just couldn’t figure a way to open a conversation (virtual) on that.

I think you’re forcing a message onto a random pattern, it’s what makes us Great Apes Grrrrrrrrrrate! 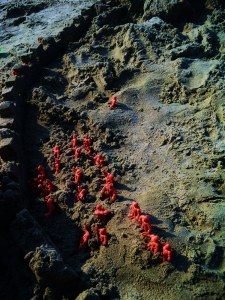 I don’t think you’re nuts, but I do think you’re 3 standard deviations away from all kinda norms and have an fine ability to express a universal longing for recognition.

Hell, if you find some, mention me so I can get some to-go .

And why in the heck would I think your folks are cowards? Hardly. Burden? Parents are made for burdens, it keeps ’em going.

Ah, yes the old message in the tea leaves trick. Dude, I just want to know what sort of air currents can carve such unusual shapes.

I don’t think – at this point – that the clouds mean much, aside from I am a saint and have to, somehow, save the world. Just kidding:)

I actually have wondered, however – just what would make it so improbable that some divinity would use the sky as a means to manifest…it’s the biggest screen we got. 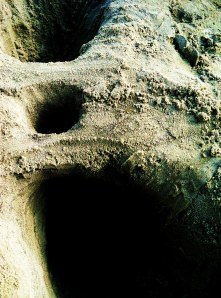 Unfortunately, with all the digital surround sound down here – who needs it?

The swasti-cloud did catch me off guard. I almost didn’t even see it – dwarfed as it was by the pupae-puff-bundle beside it. Too many intersecting right angles for me to be entirely comfortable with, presented as they are in the big, bland, mindless sky. I just don’t – knowing what I know about clouds and their formations – see how it is possible.

Could be interesting to see how a meteorologist responds to the perfectly reasonable email I haven’t gotten around to writing. I ought to send it to a bunch of other meteorologists and climatologists…I really want to know what the professional think about all those perpendicularities (okay – maybe I’ll avoid using that word:)
(It wasn’t a real word anyway)

I thought you might think my folks were cowards cause I called them cowards (current: sorry) (it was in reference to bravely dealing with my adolescence. My parents should have let me run away and figure it out on my own. But, noooooo. Just kidding. If parents are doomed to have children that rival their younger selves in hideous behavior, well: I may be doomed.) 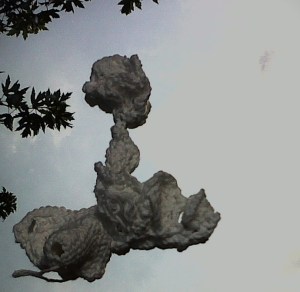 Current: On the other hand, aren’t most parents a little scared about what will become of their children? (oops.)

Not to mention confusing. Lay off the ham, dude. Shit’ll kill ya.

(I am smoking a cigarette right now.) (Gawd, I crack myself up.)

Don’t be a stress case about asking anyone about clouds, but for future reference:

“Hey, you’re a meteorologist and so you know about clouds, right? I came across this picture of a cloud online and – man, how is that even possible? What do you think?”

Geez – and I thought I had lousy social skills.

I have begun wasting paint. I love painting. I use acrylics for the flexibility of motility and opacity that are somewhat limited with oils and watercolors. I mix my own colors, for the most part – from primaries and b+w. It is so much fun to see the picture emerge from the layers of color and idea.

I did not record a song today, but I thought about songs a lot and who all those ‘you’ people are that folks sing about. A song a day was a bit ambitious. I may yet rise to the occasion – school starts again in six days. Let’s just say I will record at least 2 songs per week and will paint at least one painting a week. For a year. It will be good practice. I think that making myself draw every day for a year was the best thing I ever did…for better or for worse, still worth it. If it seems like it either daily or nothin’ – well, then daily it is. The days tend to get away from me a bit, so – twice a week doesn’t mean much when a week seems to range anywhere from 4 days to 14…it is all a blur of small sameness blown large.

So, for better or for worse…

I will just keep waiting and filling the days until…

making my own brand of thankful. 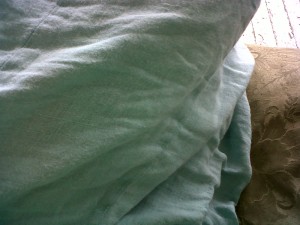