…there is always more… 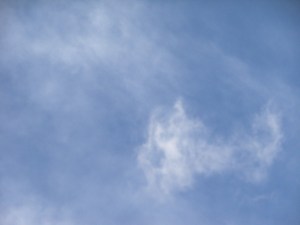 All of these photos were taken today…to the best of my knowledge, nobody else was really paying attention, as usual…it doesn’t take long to notice the clouds…they aren’t exactly hidden…I have taken thousands of pictures of clouds since the early summer…does this mean I am crazy, or an artist, or what…? Some nutty conspiracy theorist? Nope. I guess I had a few questions I have been working on in the back of my mind for a long time, since I was about nine.

I think I got some of the answers I need. 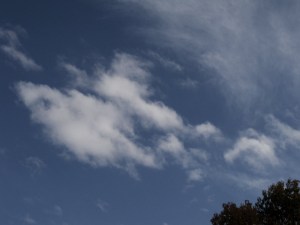 It’s been a busy day.

…the usual – which, for me – lately – hasn’t been anything that amounts to much in the world at large…but, that I still feel is important…like remaining as certain as I am able that I am worthwhile…in the way of speaking in measured doses at a table surrounded by others who speak in measured voices…not because they are crazy, but because they can’t speak of what they feel without suffering some grave reproach from without or within…in the way of printing out 50 pages of words written to me…some of the cruelest words ever directed to me, probably not even mean to some people – but, to me, with all my stories…well, they were words like snakes…and I printed them off and stacked them clean and at another meeting, where I intended to deliver them…an ugly sort of proof of an ugly sort of life… 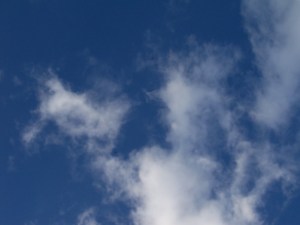 Well, I picked them up and took them with me when I left, because I don’t even care anymore about defending myself. I will just jump through the hoops with as much grace as I am able. As for my letters to those in ‘authority’ on important issues with public consequence…well, I guess I’ll just hang on to them for a while. People will realize that, working quietly, I am not going away and that I am no threat to anything good…which I realize, in this backward world…well, damn…what’s a girl to do? Quit? Nope. 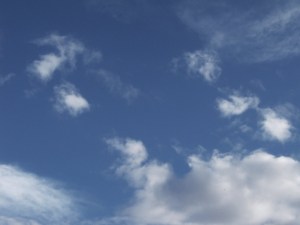 I took some more pictures of triangular clouds and a beautiful grouping of vapors that drifted like birds.

I made dinner. Cutting the garlic, I realized that I had forgiven my father. The burden of forgiveness, in the end, turned out to be far less than the burden of fear and doubt. I called my mom, “Tell Dad I am sorry I scared him and I hope he feels better and that I forgive him.”

I do know that the reason things went down the way they did is because fear and doubt, at some point, took precedence over the force we call Love…and then it was just a word…dead in the air…

We forget that all our words used to have meaning. I guess I stopped watching television because I couldn’t separate the words from their meaning…and it became too sad and frightening…all the talking about things that shouldn’t even be happening…

It made me scared for my kids…to think of how the world has changed in my relatively brief life – just 34 years! – and to think of what will be gone by the time children born today are my age…

How in the world is it even possible
that kids are still starving?
Even here.

I talked to an old woman voter yesterday in eastern NC (calling elderly Black folks and reminding them to vote in the mid-terms is a great way to take your mind off your wreck of a life-as-you-know-it) and she said,

“I ain’t even gonna bother! We done decided – they don’t do nothin’ – you go out and vote and then they just talk. Nah, we ain’t gonna vote.”

“Well, if you have a minute can I give you a number in case you have any questions about candidates?” 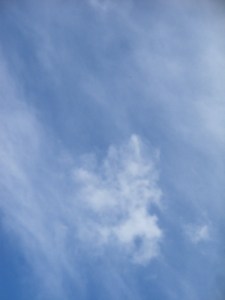 It’s all so confused, isn’t it?

(I love talking to people who talk like people I grew up with.)

“Yeah. They have.” Sounding disgusted. 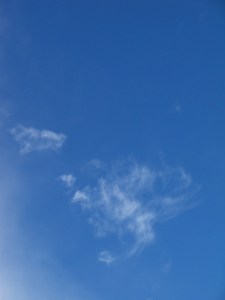 “Well, if you can’t vote then hope the biggest hope you can muster that somehow sense will prevail. There are still folks working very hard to get things on track.”

“Now, I do believe that President Obama was sent by God.“

In the end, she promised me she would vote and that she would talk to her family about voting.

She said I changed her mind. She made my day.

I don’t know if God sent President Obama. Maybe. I don’t know much about religion or politics. I do know that he seems like a good man trying to do something near impossible…set back time in ways that make sure we are able to move forward…

I suppose it would be more than fair to say that I believe in God now. Not in a crazy way, just in the way that what I have been doing for years feels more like what I ought to focus on…advocating, teaching, figuring and paying attention…teaching my kids to notice the small things because all the big things seem to change too fast.And while my kids can’t be with me, due mostly to grievous misunderstanding, well…I just keep working on repairing my heart and keeping my mind strong by focusing on things that are hopeful.

Fear and doubt can un-do us.
It is how we lose ourselves and everything that means everything to anyone. 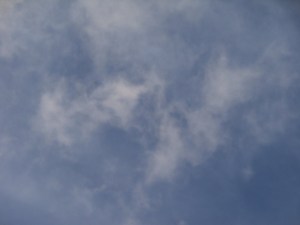 I still don’t know what any of it means, maybe nothing, but what other than God could make the skies look so loaded? I know people get killed over stuff like that…or try to cause some upset. I am still just trying to figure out how you can have the same cloud twice. Still, nobody has told me. I want to know about the triangles, too. I know, from a good professor, that a triangle can be shorthand for ‘change’ — from the Greeks. I know there are other old characters, as well – just because I lived briefly in a college town with a strong sorority and fraternity scene (Athens, Georgia…for a quick, sad minute…)

If left to our own devices, we devise our own answers.

I thought ya’ll decided that chemtrails are a conspiracy…the sky probably is fairly toxic with the past couple centuries…maybe God just works with what there is to work with…like I do…maybe all that pollution from neighboring states was just what was needed to finally convince me…it took awhile for me to figure out that something strange was going on, but I knew that what was occurring began to feel a bit impossible.

I love how hopeful art makes me feel.

Today, I got a letter from my new penpal – I am saving reading it until I am able to write back immediately… 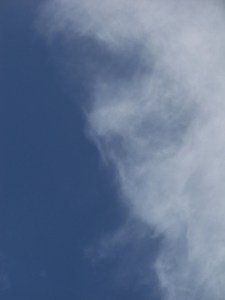 Man, the only person who has written me back is on Death Row. Damn.

In some ways, I think I gave up today…Thank God….I figure it will all work out somehow.