How Realities Are Built and Broken in 3 Simple Steps

This is free-written and unresearched and initially inspired by reading about M-theory. I’ll figure out how the strings weave in later. I have to go fold laundry and pay a couple bills, clean the cat box. Whatever. By the way, if any of you suspect I am crazy…well, that just shows your own ignorance. Really. These ideas are not as flimsy as you may have initially concluded, whether you like it or not. If any of the people who turned on me ever want to reconsider their hasty and hateful assumptions, well that’d be a fine example of tolerance.

Have a great day, folks.

“Sense” can be thought of as electron-based reactions to environmental stimuli, as even silly taste relies on ionic reception. Interpretations are learned and conditioned, mediated by culture and reinforced internally by hormones released in response to cultural reactions to our sense, approval and – conversely – fear, mold our interpretations of our culturally neutral natural environments. Therefore, as our learned interpretations develop we literally see, hear, smell, feel, taste things differently.

Our consciousness is responsive and microevolutionary, meaning that our brains and bodies become ‘wired’ to experience the world in a particular way within the context of our lives. We are able to enhance or diminish qualities of our sensory interpretation through the content of our exposure to particular stimuli. The notion of de-sensitization is not uncommon. However, we are able to heighten our sensitivity as well. As we manipulate our awareness of our surrounding environments, our brains literally change as neural pathways develop or grow dusty.

Therefore, our experienced consciousness is highly subjective. This is not to say that your reality is any less real than mine is. Our brains can ‘read’ the world in very different ways, depending on what we have learned and our individual proclivities, which are genetically-based.

II. There exists within our natural environment an electromagnetic field

There is no need to expound on this too extensively. It’s a well-known fact. 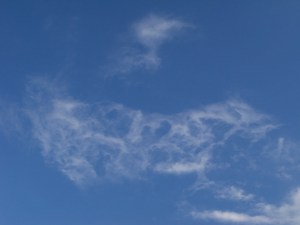 What is missing from our assumptions about the human condition is the obvious electrical relationship we have with our broader environment. Or shall I say, had. It is highly erroneous for anyone to present the facts of human bio-electrical activity and the existence of an environmental electromagnetic field and to then neglect the relevant space between those facts. We do not exist as separate from our environment, no animal does. To disregard our fundamental connections is to deny the very nature of humanity. Such negligence reduces us to little more than robots of ‘free will’ – ironically just ‘doing what we have to do’

Within our environment is a vast network of balanced connections, an electron-based call and response within species and between species. If, as it has been presented by various men of faith, the world as we know it was ‘designed’ as a environment of holy equilibrium, the most elemental balance is that of positive and negative charge, i.e. electricity. A little murky, yes? Yes. It’s a totally new way of thinking about it all…one that actually may, as it develops, make sense. 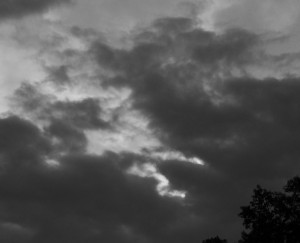 Was it a grand design? I don’t know. It could be just a big, perfectly beautiful accident. I have written before that all forms are basically the same: two lines – a straight and a curved – just put together differently. I just posted correspondence that stated ‘Nothing is random.’ Let me clarify that statement, in the beginning everything was random, a happenstance collision that resulted in an entropic evolutionary course. The overarching force we call God by so many names developed long before we developed, but I don’t know if this development was prior to or as a result of the Big Bang. It is all hypothesis.

I think that, as the world refined itself through trial and error, balance developed – most occurrences can now be traced to a causal factor, thus eliminating the random. However, when humans interject their ‘free will’ into the environment, disruptions occur and cause a metastisizing chaos, a tragic imbalance.

We tend to think of evolution as pertaining only to specied form, we do not think of the ways that the elemental physical (pertaining to physics) environment may also evolve in response to activity within the natural environment. This is a terribly flawed way of thinking, to suppose that our bodies can change over time, but that our electromagnetic field does not, or does so in a way that is so slow that it is best left to theory.

I am not proposing that the electromagnetic field has a conscience or a store of knowledge. That would be silly, like imagining that some old man lives in the sky. Utterly foolish. I am proposing that electrical activity has particular characteristics and that those characteristics may be interpreted by humans as feelings or sense, and that those interpretations can be reinforced by our bodies of knowledge – double entendre fully intended. Our physical bodies, built by ancient blueprints, have more sense than we give them credit for in our modern busy worlds.

What I am proposing is that as the world as we know it developed, connections between species and the broad environment also developed. I have previously hinted at an intention, a design in which these connections were created to act as a mechanism for oversight. I don’t think that is necessarily the case, because what could’ve intended such a mechanism? God? Maybe. I think that the power of God is less a strategy-oriented force and more a big, straightforward Goodness, a culminative current that is positive in nature.

There is the strong possibility that ‘God’ may be found in the relationship we have with the natural world and that, a long time ago, that relationship was much stronger than it is now. Not a new idea, but one that has been decisively removed from many systems of belief – for the purpose of centralizing control of faith in and around established religions, which often use fear and intimidation to manipulate the realities of their congregations. It is ludicrous that some attempt to separate God from nature. That, also, is simply illogical.

I understand that, culturally, this proposition will be slayed as some dumb tree-hugging shit. I fail to understand why people have allowed our simple and good humanity to be so complicatedly undermined by the definitions provided by a corporate culture that knows it will earn more by selling us hate and fear than it will by reinforcing our fundamental simplicity, our goodness.

“But what about Jesus!?”

What about him? Perhaps his mother focused deeply and positively and a spark of small lightning flew into her womb? Who knows? I do know that humans probably used to be able to interact with the environment in ways that were elemental and based on deep connection. “Yeah, but how!?” I already proposed that our pineal glands and our central nervous systems are likely involved. I am not a neurologist or a shaman. I am, however, pretty good at solving problems and this is the biggest problem I have ever tried to solve, but it’s coming together.

“Why can’t humans, you know, connect now?” I think that connective capacity, like so many human traits, exists on a spectrum, with some people being more connective than others. These would likely be the sages and prophets, etc. etc. From a specied perspective, it makes a lot of sense that some of us would be predisposed to broad environmental connection. However, as I suggested a few paragraphs back, our sensory systems have the capacity to evolve. They can also devolve. “Use it or lose it.”

We have lost a lot.

(I think Jesus was probably schizophrenic, which should probably be called schizoelectric. It’s not the elemental connections that make these folks crazy, it’s all the static they get from the stupid human world that wrecks their minds.) (Just to clarify, I think all prophets were schizoaffective, but not all schizoaffectives are prophets. Get it?)

“Jesus wasn’t a schizo!” Well, what you say to someone who turned in the middle of the road and proclaimed to be the son of God? “Yeah, but he could do all that cool stuff!” Let us remind ourselves of the urban legend phenomenon. However, I think that it is entirely possible that Jesus may have done some mighty cool stuff, all elementally based. The power of God is the power of electricity. It’s pretty simple.

“Yeah, so why don’t people do cool stuff now?” They try to, it’s just stripped of its relevance, relegated to quirky entertainment or jammed into the constraints of organized religion, or ignored because we have conditioned ourselves to not see what we have been told not to believe. Nobody pays attention to any of it because religion has totally screwed up God, made the whole concept confusing and murky and argumentative.

When some famous theorist figures this out that this is not all New Age fluff and I am sitting in my house alone and ignored, well that’ll be pretty damn funny. There are some folks working on it, but none of them has, to my knowledge, documented anything or experienced anything or been forced to lose anything…