The meeting was tense and some buttons were pushed.

It’s good to have a button pusher around, because then you know where your buttons are.

The two friends left the space with a cup of coffee, overly sweet, and sat on a curb, smoking cigarettes and laughing about what a tragedy it is to be made into a jerk, to have every solid thing you ever did erased in favor of a few fractious and misinterpreted moments.

For those who have never been written all wrong, it is important to recognize that characterizing a person on the basis of your own skewed perceptions of them is one of the most disrespectful things you can possibly do.

It was acknowledged, however, that perhaps the part of the jerk was played a bit too well on that particular afternoon.

As they stood up to walk to the car, they saw the man that started it all.

The question was not asked in an ugly way, it could have even – with willingness – been construed as conciliatory.
The man turned and rolled his shoulders, held his arms out in a gesture that said he would fight. The two friends were surprised as the man shouted, “Walk away! Just walk away!”
“Huh?”

The woman, shook her head, called out:

“Wait a second…that wasn’t meant to be ugly… it’s a matter of perspective!”

She was smiling as the man turned around said, “Stop! Just stop! Stop talking to me! You cannot continue to have a conversation with somebody after they’ve turned their back on you!”

She pointed to herself, in disbelief, “Me? I wasn’t saying anything that should…”

The man’s lady friend who, leaving her post at the parked truck, crossed the parking lot. Her face was all twisted up, “Just leave, okay? It has been a very triggering afternoon. You have to leave! Just go!”

The two friends were laughing as they walked away, because suddenly the situation was quite clear.

I really needed to write my penpal today. It was funny, when I decided to try to establish a penpalship with a Death Row inmate, a friend said, “I don’t think that is a good idea. I think it would just hurt everyone involved.” What a strange thing for someone to say…

Vincent is my friend. How can a friendship hurt people? Well, I guess it is just a matter of what develops out of the interaction and what it brings to the world and to whom. It also depends on the definition of hurt and, again, who is truly hurt and how.

I am sick of seeing people get hurt. What I am really, really sick of is seeing people make themselves hurt inside, by the way that they choose to see things ugly. I have spoken a lot about the conscious choice between hope and fear. People don’t seem to understand that our minds do not always serve what is best in our hearts. We have gotten terribly confused, haven’t we? It will be okay. We just have to trust our hearts…some of us have to find our hearts all over again. It is sad that some people have been hurt so badly as to be…barely human at all.

Or maybe they are entirely human?

At any rate, there is tragedy in our stories.

Sorting through to find the point of it all is how we to be better. 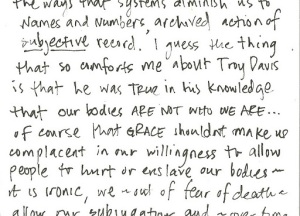 *
*fibonacci colonial beings image not mine:)

hahaha – remember last year, when I was all panicked: “The Explainers will explain things. The Fixers will fix things.” – and it sounded SO crazy .

Not so crazy anymore, is it?

I told my mother yesterday, “Well, it seems I am operating at the edge of a curve and so if what I am saying to you doesn’t make sense…well, just wait a year. I am just really good at figuring out how things play out.”