By cloudcalling February 20, 2012
Here is something I wrote back in good July, on the subject of time and perception.  It may be a re-post.
Perhaps this matter of time is a matter of rhythm.  Oh, rhythm – a word that brings sex and sweat and, now, blushing.  Intended to capture the spacing of points on a conceptual wave, the word has developed a reputation.

The world is full of rise and fall, syncopation and break.  Even our hearts rely on rhythm, and our breaths are measured.

We sleep and wake and sleep again.

Time isn’t a matter of numbers, it is a matter of space.  Have you noticed that clocks no longer tick, the dots on the digital don’t blink anymore?  We have separated rhythm from time and numbered our days to abide by the expectations of our economy and its institutions.

Our experience of time has become a collection of moments spent glancing at clocks, adding and subtracting hours to try to figure out how much we have left.

There are reported to be twenty-four hours in a single day and so the math is easy to do.

Why is it then that some days seem impossibly long and some flash like lightning?

Some people have proposed that time be measured in terms of movement, rather than in numeric accumulation of specified allotments.  How then, if time were the spinning of particles, could we possibly feel it?

We are able to hear sounds, like the beating of a drum or the buzzing of cicadas, because our ears detect the movement of air and the tiny hairs in the nautilus sea of our inner ear are stirred by the wind of the whole wide world and electric pulses are sent to our brain, where we decode the blips and beeps and static hums and we hear the most beautiful birdsong, the falling rain, the spoken word.

Time does seem to shift doesn’t it?

Of course it does.   Our days, the long and short, are caught in the waves.

It all began somewhat innocently.

Actually, it was never innocent.

Even as I wrote the first entries, I felt driven in some nebulous way.  So, while it wasn’t naïve it was certainly never a scheme.  I was expecting to lose interest.  I always seem to be losing interest.  For example, right now I am losing interest in writing this.  I want to sit and stare at the sky (shell blue with stratus) and just roll the ideas around in my mind, crawl into them like they are soft and I am tired.

What I was saying is this: I never intended to prove that…what?  What exactly have I proven?  Gods? Clouds? Trees and light.  That I am, in fact, somewhat mad at times?

Perhaps that is apparent and perhaps it isn’t?

I stray from the point quite a bit.  Not really though, because all the points are connected in a big  conundrum regarding the mutability of meaning in our symbols and their expression. 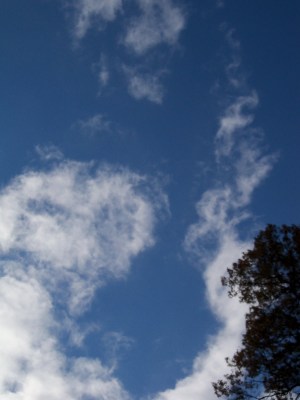 As it turns out, this dissolution of meaning and the divine apathy and anomie that it has bred are a very important part of the story.

Everything is a story.