As you were writing re: myths I was writing that "People seem mythical."

By cloudcalling March 16, 2012
Myth is the mode of simultaneous awareness of a complex group of causes and effects. M. McLuhan 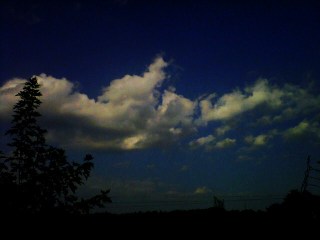 A few years ago, I was trying to figure out the basic elements that all humans share, what do we all have in common?I had been teaching human reproductive health and safety to middle school age kids and had been strongly hypomanic for about a year.


I spoke at inspired length to the awe-struck adolescents, wearing red cowboy boots and with tattoos in full visibility. In the back of my mind was a near-constant bloom of disbelief that I had somehow gotten such a weird, awesome, challenging job. I was in love with the whole world. I asked strangers for their addresses and I was beautiful. I was learning everything all the time and I was laughinglaughinglaughing.I wonder if the professionals would read this as a glorification of “dangerous” psychiatric symptoms? Probably. Perhaps it is a glorification?  I don’t particularly see that as a problem.  Are we not allowed to glorify the times we feel glorious?I asked the students:“Where did you come from?” …“Where did they come from?” …“Before that, where did those people come from?”I showed them a double-helix and explained the ways that the sequence had to match a certain way or you get something different altogether. Not bad, but different.“Nobody is the same. Not even twins.”They were amazed. I could tell. They would never forget me. This is what I told myself and why I wore the red boots…so that the kids would pay attention in Sex Ed. – because it’s important. Sex makes babies and we really don’t know enough about human beings in order to properly care for them.  We destroy people up in some tragic ways.  We destroy ourselves.

My heart broke when I really understood how much of what defines us in relation to one another and ourselves is fear-and-loathing based, how much it is controlled by our fleeting histories.I considered all the stories I could imagine and I watched everything very closely and I saw how scared everybody is, how angry.  This perspective isn’t new to me. It is what I have been afraid of my entire life. It is the real world.Even when we’re having fun, we’re terrified.  That creates a lot of dissonance.  I didn’t handle cognitive/emotional dissonance very well for a long time.  It created a near constant source of panging and prying distress.  A so-called depressive cycle.
Isn’t it interesting that “Stress” has been shown to exacerbate or bring about the onset of psychiatric symptoms of disorder? Isn’t it interesting that a great deal of our stress is specifically people or task/event related?One of the things that I identified as a unifying thread in humanity is the fact that all of us, each and everyone, have been royally and mightily abused by the Cultures of Economy and the false realities that they produce.  Victims and Perps, it’s all the same game.We are all very confused right now, aren’t we?I actually take that as a good sign, it’s another thing we have in common, and maybe we’ll try to figure out what’s really going on.There is some deep sickness that pervades our world when we establish our right to define other people’s realities and determine what their lives should or should not entail and why.In many of my dealings with medical model psychiatry, it was always the arrogance that made me suspicious.

“Who the hell does this guy think he is?”

The Professionals agree that the Experts are experts only on themselves.  I could never get a straight answer out any of them.“It’s your chemicals, Faith. Your chemicals are out of balance.”“Faith, I’m sorry you can’t see the way you’re behaving. You’re going to have to have this injection.”The last time I went to the hospital, involuntarily on a stress-related stigma-commitment, I tried calmly explaining that I had an “atypical” way of processing information and emotion, that I was very “intelligent.”(“Everybody is you know!” smiling at the nurse in what I hoped was an endearing and genius way.)I tried to tell them that I really could explain everything, but that it was complicated.“Really, I’m okay.”“I’m sorry, sweetie. You’re gonna have to take this shot. It’ll help you calm down.”I didn’t think I appeared upset. I was just trying to be reasonable.  That is the grand irony.  On my records they mentioned that “patient stated she was a genius and that because of her elevated intelligence we may not be able to understand her…patient is hyper-verbal and grandiose.”


It seems to me that human beings should be afforded the opportunity to gain a certain amount of knowledge about how their brains and bodies work.  When people know how things work, they can actively begin to understand what precisely is going on and why they feel the way they feel.Misinformed pain destroys lives.  Not only do things hurt and enrage, they don’t even make sense…that is why they hurt and enrage. It just goes round and round, a tiger and a tail, a fight and a flight.