“Even talking about not being angry seems triggering.

Bottomline, nobody has a right to dismiss the validity of another person’s emotional reality or to judge it or to say it ought to be anything other than what it is…and in a lot of folks cases, what they feel is anger. That anger needs to be honored and as we’re indicating, offered some sort of productive outcome.

Anger can be destructive. We can get stuck in our anger in a way that makes the world very ugly and sad, defined not by our triumphs but by our wounds. (“We” here is people-in-general, not just survivors.)

I think the reason that people in other countries/places where militaristic fascist regimes are in place do not rise up is because, quite simply, they will be killed with their families. So, it makes sense to think that the only way to transform some ugly systems is to gently transform the people that do their bidding and it’s true, this is often better done through benevolence, open dialogue, and forgiveness.

Transcendence and acceptance are powerful tools in making ones life meaningful and beautiful in the face of adversity. These tools have been used by all sorts of people all over the world, throughout history, when they are faced with living in conditions that are likely to bring some sort of death to them.

Just as it is not appropriate for anyone to say what people in other lives might be experiencing, and I do understand that I did this in my surmise that people are angry (that’s qualitative observation, of self and others, not assumption), I also don’t really think that it is appropriate to use strategies and perspectives useful for coping in hopeless, genocidal situations within movements that, ultimately, are based (or perhaps should be) in the belief that things can change. Though people do get killed for not taking their medication, the cultural landscape is a bit different than waiting for your entire village to be burnt, not that I know anything about that.

So, could we please think about this idea of emailing professors about this event, and encouraging them to tell their students?

We have 3 draft outreach letters sitting around here that need feedback and revision, weigh-in. One of them is a press release. While dialogue is certainly vital and encouraged, can we accept that people will feel what they feel for their own reasons and work on actually getting word out about this event?”

On the Subject of Human Rights and the Relationship to Psychiatry

(This is what got me thinking about anger…)

“Yeah, that’s pretty much the situation…though I’ve not ever heard it expressed in such brilliantly encompassing terms. Really. I’m not being sarcastic. (There is another problem with trying to communicate anything online, in text…people get the wrong idea about syntax and sincerity and read the wrong tone.) THAT WAS BRILLIANT. I mean that as a compliment and as a double entendre, because you really did peg (another force word that implies swift and thorough pinning down of one thing upon another in a way that identifies it or holds it in place) the way that forceful and coercive psychiatry establishes a very inappropriate relationship in their treatment of “patients.”

In addition to some grosss romantic domination/subordination game, there is some really insidious codependence going on (they need us to be sick so that they can feel useful or otherwise profit – this extends to all abusive systems of power and commerce…they keep us sick, and lured into sickness…)

(Okay, sorry, I can get a bit sweeping and enthusiastic when I FEEL SOMETHING. Wow. That seems really emphatic. It is a big deal though. Usually, because I find outrage to cause me to spend too much time writing and, um, being outraged, I try to temper it with some good ol’ fashion compassion ((nice slogan…)) per “recognizing their humanity…” However, the real bottom line – and this what I referring to in the bigbigpicture – is that systems of distorted meaning have seriously screwed up our ability to even know what’s what, to make up our own minds in ways that aren’t hurting ourselves or other people…and that really pisses me off, as a human being, with compassion for other human beings that have gotten really tragically confused in the past (yearsandyearsandyears…though really not so long)…)

(I mean, I’m not even really that upset about what happened to me. I mean, hey, I wouldn’t have this great story and insight that I’m gonna somehow use to really put a dent in the legitimacy of medical model psychiatry, among other things. I mean, yay for me. I survived. I’m a bit disgruntled, because, you know, years and years of medical model treatment and paradigm, mixed with the side effects of medication, the various traumas that stem directly from my experiences with psychiatry, and the totally wrecked sense of self…well, yes, all that is very interesting…I still feel better than I have in years.)

However, I’m super-pissed about all the people who don’t realize they are trying to survive, and I’m super-pissed about the people who have died, and all the beautiful, brave, BRILLIANT people that got wrecked by bad ideas and abuse. I’m very sensitive to cognitive dissonance…and I’m tired of living in a world where people lie so much that they don’t even realize they are lying. For money, of all things.” 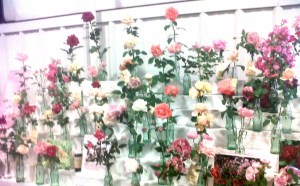 In Response to “the upheaval and its resolution”:

This changed my morning.

I was wondering about the world today.

Thinking about what goes up and what comes down what is spinning us all into tangles.

it is really on…

just as it needs to be …

for some reason not always known to me.

…the way it goes up and down

and how it points to where you need to go

The people on the street love me.

I love them, too.

They are among my most true friends

…because I can speak “nonsense” to them

and they understand exactly what I am saying

…and because they are always happy to hold my hand

the girl with the “pretty hair”

and the old drunk man

…and we tell each other how beautiful it is to see one another clearly.

Sometimes we get teary-eyed together and I know that makes something happen in the world.

I can feel it and they can too, because they are still honest about what it means to be human.

I live in a house, but I’m not a house person. I keep my windows wide open at night. I keep my doors unlocked. Nobody has ever bothered me. They never will, because I put an imaginary spell on this old house.

I love everybody and I go back and forth to house, to office and to street equally at home because I finally figured out that I don’t belong anywhere

…and so I fit in everywhere.

I’m the wild card, the one that wins the game

or throws all the numbers

and I just smile

knowing that if I lose my place

as I’ve lost it before

that there are always new places

…and so I may as well just feel at home.

Feminism is such a logical conclusion.

Do we really want to talk about the original sin?

The root of all problems lies in assignation of worth and value by those with an interest in commodification of life for the purpose of pleasure and profit. It does seem as if most problems throughout history came about through the designation of property value to human beings and the environment.

The right to not be property perhaps qualifies as an inalienable right.

In looking back, it really all did start with male domination and all the conflicts that it has caused.

This isn’t radical. This is history.

Can one simultaneously recognize the rights of women and yet not recognize the rights of others impacted by externally imposed stratifications of human worth? What about vice versa? Can one fight for the civil rights of a descriptor identified group and yet fail to see that oppression and diminishment on the basis of sex or expressed gender is at the core of all fascism?

I suppose if we wanted to reduce it further, one could say that the origins of fascism lie in human domination over land and animal? This is something that anthropologists and sociologists figured out a long time ago. This is nothing new.

This is what I think about when I look at twitter…the stock analyst is in her stock analyst world, Anonymous is in its anonymous world, Kim Kardashian is in her Kim Kardashian world. Tatum Channing is thinking about boys and the meaning of life. For some reason Rumi is on a lot of minds. The other day it was AA Milne. On the day in between it was Kahlil Gibran.

I wonder if anyone’s done a study on AA Milne and personality archetypes. Who would be God? Surely not Christopher Robin. He didn’t know a thing. I suppose, in a way, that all the animals – some real, and some stuffed – are God – in different elements. There is no evil in Winnie-the-Pooh. The closest is the desolate Eyeore, though he is far from evil. He is simply doubting and glum. Those things aren’t evil. Those things are human…wait?

Wasn’t I talking about Eeyore? Or maybe I was talking about gods? Yes. Yes I was. It’s interesting that the stuffed toys don’t seem to know too much? They are bumbling and innocent. Maybe Piglet is a little fretful at times? I don’t know. I’m not exactly reading AA Milne right now, and probably won’t later, either.

Anyway, back to AA Milne and the meaning of life. Well, I don’t know that I’ll get that far, though perhaps I already have? Nah, probably not. I think someone has been there before anyway.

It’s clear though, that the animals, particularly Owl and Rabbit, are wise…though not so wise that Rabbit didn’t one paint himself into a corner. Such things do happen in a tidy, tidy home.

(These thoughts got interrupted by an update to a post on Mad In America, where I’ve been trading some ideas about the complications of human rights messaging, in spite of the fact that the bottom-line is so very clear. I mean, how can you know these things in and out and still walk around acting like it’s all hunky-dory.)

It’s enough to make someone lose their mind.

Of course, I won’t lose mine. In the course of psychosis, I thought a lot about Brer Rabbit and his briar patch. How he said, “Law, no, don’t throw me into no briar patch!” and how Brer Fox threw him in anyway, giddy at the thought of the rabbit’s tangled body, caught in thorns. Yet, Brer Rabbit laughed upon landing, “I sure fooled you! I was born and raised in a briar patch.” He got out in a split second.

I finally figured my way out of the briar patch that I was raised in and, now, no thorns or tangles are a match for me.

(I know I’ll pay for that remark, in the humbling balance of the ways that stories unfold. You make a lofty claim. You take a mighty fall. I know that story.) 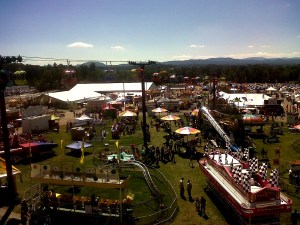 Note: The clouds have been lovely lately. Here’s a picture from the first week of September, 2010:

Here’s are a few from today:

I actually have images from the first week of September of 2009, too. I was drawing Pleura at the time. I am deeply pleased that I have all this evidence of what I have been thinking and doing and dreaming and scheming. A couple of decades of letters and messages…some stored in boxes, some stored in circuits, some just drifting around the ethers.