MIscellaneous Dancing With The Call and Response

I realized, yesterday at work, that I hide my full-power smile and light-up eyes because my face seems to break social rules in some settings. I remembered several times that, when I was renewed to be very happy and gratefully in love with the world, people told me that I looked insane or like I was on drugs or keeping a secret.

Once, a co-worker told me that my enthusiasm and excitement in the early morning was “insufferable.”
“Well, yeah…” I thought. “Don’t we want to be insufferable, in the sense that suffering would not be able to touch our hearts?”

I don’t think that’s what she meant though.

My joy was a wildebeest on a beach full of fragile shells, delighting in the bounding sands and splashing waters, running and leaping, trying to get ahead of its own shadow.

It took me a while to become sensitive to the effect that my out-of-line enthused beingness had on other people. I noticed that it made some tired eyes wake up and I saw that it made some people nervous. A few people begrudged me, from a very tired and wounded place in between their minds and heart.

I wondered if they didn’t like me because they wanted to be happy and didn’t think they could or if I somehow reminded them of something they’d lost and it made them sad?

So, I learned how to look less happy and I started feeling people’s sadness. In most people’s sadness, there is a small light. We only grieve what we love and sadness cannot exist in the absence of its relation to something that we love deeply and wholly.

I didn’t think I was learning all this. I was just adapting, evolving…trying to find a way to be in the world.

There are very few people in the world that I feel like I could be my whole happy self with in company and conversation, because after the clever and chuckling feeling, the cocked head and contemplative smiles, I can feel that my eyes change and everything becomes very, very real and beautifully connected. Being becomes grace and grace can be an awkward element in the midst of a casual conversation, a crowded room…a family dinner.

Our capacity to understand the true nature of anything is inherently bound by the limitations of existence and experience. For example, we will never be able to know what it is like to be a bird or to hold bird consciousness as our own, but we can observe birds and we can imagine what it may be like to be them and consider all that we know about them and how it affects our understanding and we can, in this study, find a particular wonder in the imagined beingness of a bird, a reverent appreciation for the way that feathers catch light and hold wind and for the call and response of songs, the way some birds know how to find their way home across great distance. We can find ourselves asking, “What is it like to be a bird? What does the world look like from up on that wire?” We can begin to feel something in response to what we see as birds. 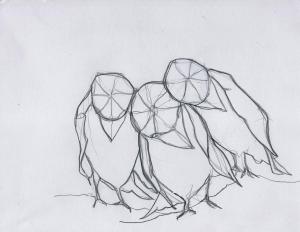 The day I left California, I needed to walk up the convenience store to get some snacks for the plane and some cigarette papers for my tobacco. I woke up very early and got directions from the hotel desk staff. “Just walk across the parking lot and turn left.” It was dark still and cold. I got lost in the parking lot, and found that there was a fence hidden in the bushes. When I finally reached the street, the traffic was very loud and fast. I had to cross a bridge over a highway, and there was a small segment of land that the roads had carved out, just a few trees and some grasses, a small pond. I saw, as the sun rose, that there were ducks in the pond, and their swimming made ripples in the reflected sky. “That is where they live.” I thought. “There by the highway. None of these cars ever sees them, but they live here, in that little pond by the airport and the expressway.”In that moment, as in many moments, I saw the world differently.

It is not a secret that I talk to birds.

in my own vernacular contemplation, it does seem very reasonable to me that we are, as animals, connected to the world and to one another and that we are sensitive to the world in ways that we are not always consciously aware of. I suspect that, in the vast and varied texts of metaphysical knowledge and philosophy, at least a few people have explained how these forces work within the world. In my  exploration of ideas, I found that it made sense to me that consciousness must be somewhat electrical in nature, perhaps carrying archetypal meaning in current and wave, that we then interpret as feelings such as universal love, drawing conclusions from that felt state of grace.  Perhaps as life developed (all life, anything with an electrical field) the consciousness of the planet (Anima Mundi) developed with it in an evolution of pulse and flow, story and theme carried on. This correlates with popular notions of metaphysical co-creation, that spiritually we feed and are fed by the universe we exist within and are a part of, down to the particles of old stars that are still caught in our bones and the arrangement of the planets at the moment of our entry into the world as the smallest little spark. 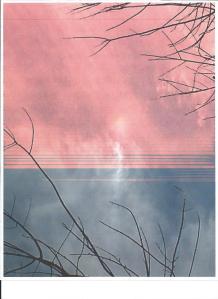 It’s a big shift from thinking of us as all separate, with our souls somehow severed from one another and from the soul of the earth itself. It turns a lot of belief systems squarely on their heads, changes everything. I am interested in the ways that people feel the world and in what becomes of those connections in the context of modernist constructions of reality. In this period of collective evolution, do people know what to make of their instincts and how are these instincts tampered with by our understandings of what God is and what we are in relation?

I mean, a lot this <~…~>
(meaning everything, but it does look like a sad little sleeper) all started with someone’s dream.

To comfort myself, and to keep from being severely and persistently horrified, I tell myself that it has to be true that most people have some really great, super good dream hiding in them and that maybe it will find its way out into the world.

I don’t begrudge people their crummy dreams, the dreams that sell them short…I blame the systems that told us that it’s best if we don’t dream, that small dreams are better, easier.

I think grandiosity may well be a divine human right.

“I’m actually used someone attempting to take me down a couple pegs whenever I express a bigger thought. I wonder how much of it is conditioning akin to being “put in one’s place” with hierarchies and such.”

Yup. That happens. It’s one of the social economic components of the mechanisms that shrink dreams.

You know all those movies about people with big dreams and there is always some person or group that’s like, “No! You cannot dream that dream!”

(Then in the movies, the person dreams the dream anyway and it’s all wonderful and tear-jerking and it makes you want to save the world. Instead in real life, you go to bed, because big dreams aren’t for you – they’re for movies.)

…and even to say that some are knowers and some are dreamers…those, too, are labels, value-laden and hierarchical. Saints and sinners, virgin whores, wisemen and fools…it’s all the same old song and dance but who is leading who around here?

am I leading you…no, that was just for the sake of a rhyme and a step in time, a little jog left.

We just go back and forth, trading names and playing games.

This is and that is and the other isn’t…

See, it means nothing?

So, really, the point I’ve been trying to make is that I’ve never felt more human.

I think that it’s interesting that more artists and musicians – many of whom have gone through their own dark-to-light, anger-to-love, false-to-true transformations – don’t speak up about the psychiatricization of poet hearted folks and rebel minds.

(It seems like those who do speak out against psychiatric myths are all connected to the CCHR, i.e. Scientology – which is not doing the psychiatric human rights movement any favors by making the issue one that is linked to Scientology.)

I know of a couple known-personalities that have made statements over the past few decades and what’s-his-name-I-don’t-remember has the Psychedelic Ice Cream Social against ECT – but, it seems that artists, and musicmakers in particular, would be natural allies in a movement to affirm one’s right to be oneself and to know who you are, to learn and to grow and to go through dark, confusing times and find some meaning in them…I mean, that’s what 1/2 their songs are about!

I cannot turn on the radio these days without hearing the word “madness.” Of course, there are a lot of different meanings to that word.

…but, seriously, Coldplay…”all the boys, all the girls, all the madness in the world…all the highs all the lows…blahblahblah…we’ll be glowing in the dark.” ???

…um, yeah, a lot of those glow-y girls and boys are getting locked up and, in essence and in life, killed.

“You know we’re never gonna survive unless we get a little crazy.”

…and what about all these New Age awakeners?

In some ways (many, actually), New Agers have not done the cyclical shift in ecosystemic consciousness and metasensitivity any favors by culturally cloistering it in an exclusive New Age and by not stepping up to support the disenfranchised waking dreamers. A lot of New Agers have money. Where are our madness sanctuaries? Where are the resources for the houseless holy? Where are the hotel rooms for the people who spend their lives laying down in front of trains and bulldozers trying to protect the earth? Where are their legal supports?

I do think that something is shifting and it’s not just in the minds of a few golden hearted psychotics.

So, why don’t all these supposedly enlightened people step up? They know that the line between madness and so-called enlightenment/embodiment/awakening, etc. is thin. That knowledge is part of it all.
So, what gives?

4 thoughts on “MIscellaneous Dancing With The Call and Response”