I spend a lot of time, probably more than I should, thinking about the way the water of my childhood home smells. It is sulfur water, straight from a well. At my great grandmother’s house down the road, the ice cubes were yellow-laced at the edges.

It smelled, to me, like the blood of the earth itself, like stones and dew and tiny green things. It smelled a little like rain. It was hard water, full of minerals and who knows what else. Sometimes, there seemed to be just a little salt in it and it was never quite as cold as the water in town, the water in restaurants. 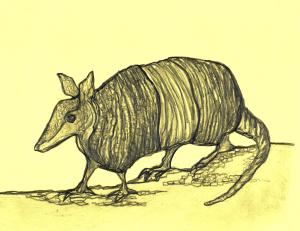 The air smelled like the water we drank, but also carried bits of the ocean and dead leaves rising to dust in the shade.

When the wind blew just right, or just wrong as the case was, we could smell the mill, the chemical smoke produced by the industrial alchemy that turned trees into something we could write our names on.

I learned how to write my name in the sand, watching as the tiniest shards of shell and glass, gravel, bone and bark moved up and away from the tip of the stick, making valleys that formed lines. I could erase the whole thing with one smooth sweep, start over.

When water is poured over the sand that I learned to walk in, it beads up for a split second before it soaks in. Tiny particles climb up the edges of the raised puddle, as if clinging to it, trying to stop it or trying to become it. The soil is so fine as to hold the water on its surface for just a moment before, all the sudden, it finds its way between the smallest cracks, the infinite shelves, falling into the sand to leave a dark spot that is perfect for writing your name in.