Humans and Nature: The Unnatural Relationship

Lately, I have been paying attention to The Daily Post’s prompts that are sent out as part of the initiative encouraging people to post everyday for a year.

Most of the time these prompts are intriguing and when I have a chance, I write out the thoughts they bring up.

This week has featured prompts about love in the technological age, whether or not we feel comfortable as modern humans, yesterday’s prompt about immortality and now this interestingly framed question about our first experience in nature.

Today’s query is put forth in a way that suggests an assumption that people have a “first memorable experience” in nature, presuming that everyone has spent their lives in cities or in suburbs and then went to some separate place to experience nature for the first time.

I think that’s weird, to separate nature out like that, position it as something distinct from our lives in cities and in towns.

I remember a debate I had on a sidewalk in Athens, GA, by the old Pain & Wonder tattoo shop in the course of which a bunch of people who didn’t really know what they were talking about (myself included) were arguing partial understandings of Alan Watts’ ideas about what nature is.

“What about pavement?” I gestured to the street. “That’s not natural.”

That didn’t make sense to me at the time, but I see the point now. I think I still draw lines at pavement though, and at nuclear weapons and chemical compounds that would not exist if it weren’t for the industry of man.

I don’t think those things are natural at all. I do not feel connected to those things. These things would not exist by any inevitable natural process. We made them up.

If a structure, concoction, or molecular arrangement would not have occurred without the willful intervention of man upon elements, I fail to see how it is natural.

I see how a city could be viewed as something separate from nature.

Yet, I am still curious about the way today’s Daily Prompt was formed.

Is it possible that millions of people spend the early portions of their lives so severed from nature that when they do “experience nature” it is an event that might inspire awe or fright?

Yes, not only is it possible, it is actual. There are lots of kids who have only ever seen woods on the television, where nature is a near mythical place without potato chips and wires.

I grew up in the woods. Nature was never a separate thing. I don’t remember the first time I experienced nature, because it was several days after I was born, when my head was still lolling about in my mother’s arms and my eyes could not yet see anything beyond a foot from my face.

It must have all been a big green and blue blur, when my mother and father brought me home.

The first place I ever lived was at Cumberland Island National Seashore, where my father was a ranger. I’m sure that I quickly grew to know the difference between inside and outside, walls and trees. However, I don’t think that I ever thought about nature as being a thing I was separate from. 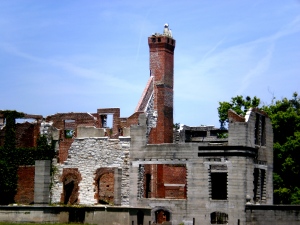 When we left the Island, we moved to other woods. I always lived in houses, but I felt at home in the woods. I still feel at home in the woods, but I like ways that cities behave and the look of the things that people have made, how the laws of nature manifest themselves in the lay of brick and mortar, the flow of traffic. I like the feeling of juxtaposition in cities, how I know that there are stars at night even if I can’t see them for all the lights that are shining. I like the sense that, a few miles out of town, there are quiet places where only insects live. I like to see the ways that plants can split the asphalt.

I understand, in 2013, how privileged I am to have grown up in the woods, when so many live in towers and in grids, surrounded by solid square miles of concrete and glass, plastic and fumes, the noise of machines.

Along the highway, a lot of the trees have “No Trespassing” signs tacked onto them, a rusted barbed wire fence that is barely visible in the shade. I know that not just anybody can go just anywhere and that wild places can be owned and kept secret.

There is nature everywhere though…in the birds that roost on the ledges of tenements, the small squares of grass that speckle the cities, the roaches that find their way into our homes, the feeling of rain, the smell of milk and sweat.

What do we make of nature? What is our idea of it?

Is it woods, unbroken wilderness, wild places untouched by the human hand?

Our ideas about what nature is and what nature isn’t determines how we feel about nature and the framing of this question about when we first experienced nature speaks volumes about how separate we feel from the world we live in, the world we are a part of and which is a part of us. 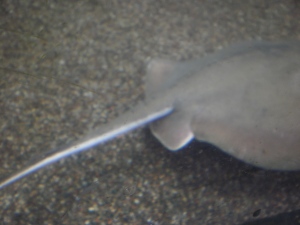