Last Tuesday, I sat outside the coffeeshop and ended up talking with someone about making movies.

I don’t know how to make movies, but there are movies I want made.

“I want someone to document my life.”

I am aware that such a desire – simply expressed – has a measure of self-aggrandizement that could be perceived.

I don’t think that megalomania has much to do with why I want my life documented, at least not on most days.

“Why do you want your life documented?”

We were sitting on a stoop, in front of a vacant space on Eagle St. I was smoking a cigarette. We were two tall people, with their knees folded up, talking about something.

I told my friend, “I wore pants just like that, when my dad took me to see Motley Crue when I was 11 at the Coliseum.”

In answer to his question, I said, “Because it’s a good story…”

“What makes it a good story? Why would people want to know about your life?”

I felt put on the spot and looked up at the sky, trying to remember how it was to be The Girl Who Proved God.

“Exactly. So what makes your story special?”

I began to appreciate the person’s questions. They were good questions to ask.

We’d been talking about organizing, the strain of it, my increasing desire to be an isolate, to have a small life with limited macro-responsibility or the capacity to meet such responsibility through doing things like quiet art or otherwise sitting on my porch or just engaging in my life.

“There are a lot of different ways to be an activist. Maybe if someone could tell a compelling enough story through literature or film, all this scrambling to gather people and to communicate ideas in traditional forms, like meetings and emails and phone calls and campaigns and initiatives…well, I just don’t know if I can do all that and still…I mean, I have other things that I am supposed to be doing, other things I wanted to do…”

“Oh, you know,” I spoke with an exaggerated casualness, held up palms up, open, “prove God with clouds to enact a new understanding of the way the world is…to show people where words came from…that sort of thing…”

The person shook their head, “I know, I know…I’ve read your blog. Not, you know, deeply or comprehensively, but…”

They paused. I smoked.

“Okay, so in that part about, um, cloudcalling, you said that you wanted to, what was it, sit in a field with other people and do what…?”

“Look at the sky. Watch the clouds.”

“What if there were no clouds?”

“We could make them.”

I laughed at the imagined reality of it, at the small certainty I felt in my shoulders that this was true, that if I were to sit in a field with people who I felt might help me to call clouds that we could probably make clouds.

Seeing this written in black and white text is unsettling to me. Do I really believe this?

“So, what…you’d have someone film that?”

“Yeah, but most people…”

“There are some people that would really appreciate it, especially because I’m, you know, “crazy.” I have that history…and I made a different meaning of it. I didn’t let it go. I figured out how it made sense, found a lot of beauty in it, instead of just trying to make it go away.”

“So, the intersection of mental illness and, what, being an artist…or being a chosen one…is that what you’re getting at?”

I wondered why he had said this.

I never said I thought I was chosen.

The person spoke: “I mean, I’ve had periods of time where I felt like I was chosen, or something like that, but…what, what are you trying to tell people?”

“I don’t know. I am not trying to tell them anything…”

“It changes the way a person sees the world, when the shapes in the sky might mean something.”

“You want to change the way that people see the world?” The person’s voice suggested a bit of an impression of audacity, both that they might think I’m audacious and that they might respect me for that.

“That’s the problem,” I said, “how real is a calling if you can just put it aside, like – “Oh, yeah, I felt like something akin to God – when I didn’t even believe in God – wanted me to use my story to communicate something important to people, and gave me all this material to work with and then…oh, I guess I’ll just take this office job.” 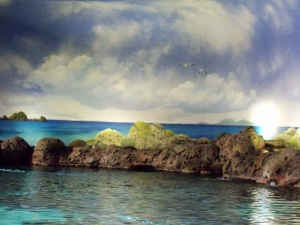 (As I write this, there are two people walking down my street singing a duet, “I forgot to say I Love You…”

The man in the duet was looking up at my porch as he walked by, and I waved to him.

He whooped, and I called down a thank you for their singing.)

The conversation on the stoop ended, which traversed super powers, the problems with New Age cultural trappings, the fine lines between crazy and art. The talk ended with the person accompanying me to the grocery store, where we continued to talk about the notion of proving God with clouds in the context of madness, relative brilliance, and the future of human history, the past.

Still on the stoop, I had said, “It changes things, when you see how old the world is, how much it has changed, when you know that you are living in a little, tiny, segment of the history and the future, that everything that defines your life didn’t exist, and won’t exist…and to feel like a part of me is connected to that, that there are ghosts and everything communicates and nothing really dies…it’s a different world.”

“I find it more interesting.”

As we were walking into the grocery store, I said, “See, someone could be filming this!”

Near the meat department, the person said, “Most people would think it was completely dismissable.”

“Not if it were well done.”

The person laughed, but the next day sent me these cloud pictures, asking me what I saw.

My replies are below. 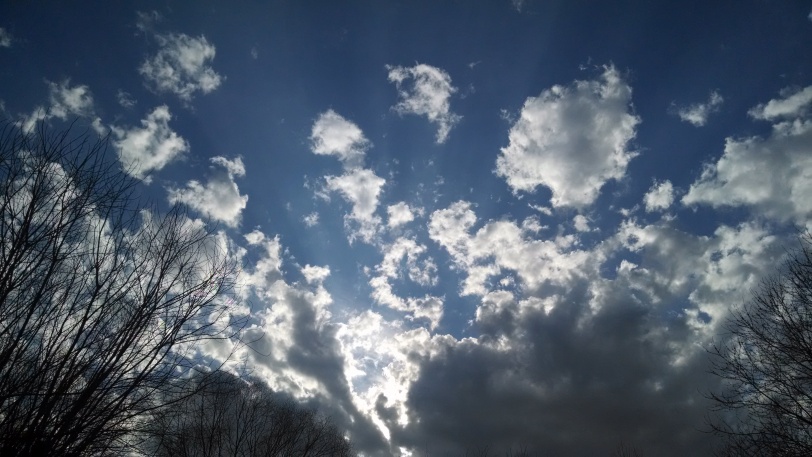 I got this message hours ago, looked at the pictures on my phone, small and blocky in zoom frame.

During parts of the day, mostly while driving, I noticed the clouds had that certain density they seem to sometimes have around the edges…not diffuse, but as if they had some substance to them.

Your pictures are quite lovely and remarkable.

I saw a sunset similar (a similar sunset) last week while I was at a stoplight, with big bolts of light cut against thick darkness, with vague scenes pulled and layered across one another, striated light.

I haven’t looked at the pictures on the computer, but I can tell you that there is the composition of a partial face in the lower mid-right hand portion of the upper left hand quadrant and that up to the right of that little blurred glimpse is an interesting form that may hold some of the bear-ish face, the otter-ish face, the seal-like, lionesque?

No, it would be the fox face I sometimes see, though not in the moment the photo was taken. There is a distinct lateral S form, with good solid edges and fine spacing somewhere near where the crown of that would be or recently was animal head might be. I may be off on the anchor form, because it was less than 3mm wide on my phone, but the lateral S is there, plain as day.

In the next frame, you can already see it shifting, becoming more angular.

In the center of the photo, there is a definite clean swathe cut through the vapors, revealing a deeper blue of negative space in what could be claimed to be the approximate shape of a bird with its wings held upright, in flight.

There is more, but as I said I’ve not yet had the opportunity to look at the photos on the computer screen, as I have worked no fewer than 16 hours today.

Thank you for spending time with these considerations, for listening and what not. I am hopeful that tomorrow night might afford the chance to write down some thoughts I have had today.

It’s an intriguing way to think about clouds.

However, such perspectives do carry the propensity to change the way that one thinks about the world, can kind of make a person lose their mind, you know?

Don’t lose your mind about clouds.

Yeah, it looks just a perfect 3 doesn’t it?

In some variations that shape looks like the Arabic letter Ayn which is similar to a “3.”

If you can see that, you’ll probably be able to see the other forms.

I have extensive documentation of the perfect 3 form, as well as triangles and Y’s.

There’s something to it.

I’ve gotta go to bed before my exhaustion really kicks in and I stay up all night.

Today, a person spoke about their feeling of wishing they had never been born and I actually felt something, for them and to them, and they felt that I felt something and it mattered. 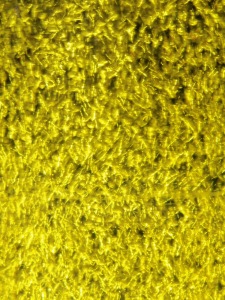 Note: Some people have very good reasons to just want to “make it go away.”

Note: Part of why I document and want to document further is because I want things to be real. I understand that this is a complex issue…this issue of realness. I spend the vast majority of my life in matters quite concrete and normative, but there is this other world…and it is a world that I love.

I want to show it to people.