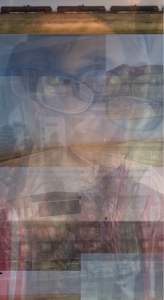 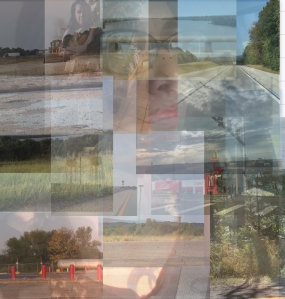 The blur of grasses
gives way to trees
again and again
a loop that is a line
that leads
to the desert
where the trees are sparse
monuments
in their singularity
blithe by the roadside
where they happened to grow
without knowing
the trucks would fly right past
toward some place
never known
perpendicular to the view of the fence
the impossible cows
the other,
like you,
far at the edge of the flat,
with its shadow dancing
the slowest dance
round and round for a hundred years
in the turning of the earth.
“Oh, how she is lit by the light of the moon!”

I only saw you for a second.

At the end of the day,
because I remember in pictures,
and in sense,
there is a collage
of rushing shapes,
and the feel of the sunlight,
my left arm,
the sound of boots on pavement,
and the wondering fear at the lip of the curb
“Why are they slowing down? Looking at me?”

^These are two poems, written this morning, right now, a moment ago, after waking up in the dark, planning to go to the Y and renegotiating that intent upon realizing that my head hurt, and that I had slept fitfully and hot, that I was still tired.

I got tired in Escalante, and haven’t quite been able to shake it, that feeling of needing more rest, of wanting to sleep until my body wakes up naturally, to fall back asleep if I want to, if I still feel tired.

I knew that I needed to get up, had a lot to do through the day – too much to do, though not really, just a couple of meetings and time with the youth, a mandatory parents orientation practice with my daughter at the pool where the swim team trains. The sun will be going down by the time I sit down.

There is also the matter of a grant summary to tend to.

The two hour computer meeting presents unique potential stressors relating to orienting and maintaining attention and connection through a mediated platform. Being in my home and listening for the sound of my friend waking up and simultaneously being a rectangular block on a screen, saying things and listening. Compartmentalizing the other things I might need to be doing, wanting to go outside, having ideas. Trying to stay present, to watch the people’s faces as they speak, to really try to hear their words and what they are saying, to figure how what they say relates to the bigger conversation, to try to be sensitive to their experience as a person speaking, alone in their car or in their home, sharing something that matters enough to them to say something.

As a listener, there are tasks of orientation to experience that require a lot of focus and awareness of attention.

They say the brain uses a great deal of energy in processing experience. Some aspects of my measured processing are operating a couple of standard deviations from the norm. I don’t really know what this means for me, but I know that I get tired after meetings.

After a 1/2 hour break, I will drive across the river to go to a listening session practice meeting at a notoriously underresourced and troubled public housing community as the Observer, which means I sit quietly and watch what’s happening in the room and I try very hard to capture that as it unfolds. I try very hard to write down everything that is said, or to summarize points in process. One thing I noticed during the last listening session up in Big Ivy was that it was difficult to attribute obvious emotion through verbatim documentation and that there was something of a double catch in trying to uphold the right of the speaker to have their words recorded accurately and representatively of what they actually said, and to not interpret or attribute meaning through the recorder’s perspective, and also to honor the truth of the way that what a person is saying makes them feel, what they feel about the story they are telling, about their friend who died, their child who died, the loss and harm they’ve known in their life related to the topic they are speaking to – which is the Justice System – because to see these people’s faces and to hear their voices as they speak, to see them sitting there in a chair in a circle, surrounded by community, some new and some known, whole lives in a circle under fluorescent lights and crying, getting up to leave as they say, “I hope you all can do something about this. People are dying.”

All I can write down is something like: ——Name: “I hope you all can do something about this. People are dying.” (leaves listening session, appears tearful, speaks strongly.)

Even in the descriptor of ‘strongly,’ I am making a vague interpretation.

I wish that these sessions could be filmed. Perhaps at some point they can. The grant runs for another two years.

If I had time to put together an LLC, I could probably contract with the county to do documentation and qualitative reporting on the community feedback and recommendations these sessions are designed to gather.

I think that brief, well-edited media is a powerful way to communicate the grave reality of the impact that certain practices and tendencies in the justice system have on people’s lives and qualities of life.

I have about 15 minutes of writing time left before I have to get ready to go to the computer meeting. I expect that the executive director will probably be in contact with me at some point in the morning, about the grant thing. I have to text someone a confirmation of my not going to the jail and the plans for coverage.

I think I would rather go to the jail this morning, than go to a computer meeting.

I haven’t seen those guys in a month and they asked me to tell them about my trip.

Hi you all –
Due to a glitch in my scheduling while traveling, I realized that I had a commitment to the people I do a group with at the Buncombe County Detention Facility (“jail”) that was double-booked with this meeting.
I arranged coverage for the “jail group” so I could be here and check in w you all, but this morning I began to recognize that I wanted to go to the jail, and that it was important to show up for those guys because I told them I would come back and follow up with them on our discussion of triggers and self-advocacy, ways to cope with the circumstances and realities of being detained and incarcerated.
It feels important to me to show up for the group today, and I regret that I can’t be a part of this meeting.
I still haven’t quite been able to figure out my participation and capacity here, but am trying to keep somewhat in the loop and trying to find ways that I might be able to work effectively here while also maintaining my other work.
This morning, I was doing some writing, thinking about this meeting:
I am reminding myself that the viable employment of people with lived experiences of struggles related to social and economic determinants of health in the work of supporting other people and communities in recovery is absolutely related to justice and absolutely related to systemic transformation and is absolutely related to accountability in regard to systemic harms and ethical responsibilities.
Much appreciation for all you do and for your understanding of my not being here today.
Faith 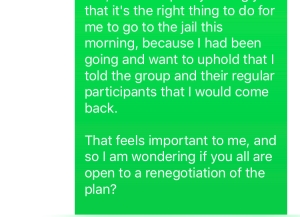